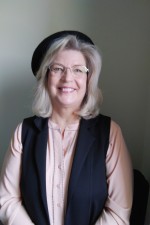 Kelly Ingleright-Telgenhoff is an MFA recipient in painting, drawing and fiber arts from the University of North Texas (2016) and has been showing her work in Fort Worth, Dallas, Houston and Breckenridge area art exhibitions since 2013.   She also received a Masters of Arts in Public History from Western Michigan University in 2000 and attended Michigan State University for graduate courses in the History of Art from 1997 to 2000.  She won a graduate research award while attending MSU.   She continued her educational endeavor with Indiana University pursuing more graduate work in the doctoral program of Art History in the area of Renaissance and American Art history from 2000 until 2004.  During this educational period she was awarded with a graduate research scholarship with Dr. Sarah Burns, the American Art History specialist, while also holding teaching scholarships for her entire doctoral degree endeavor.

Ms. Ingleright-Telgenhoff has been teaching for over twenty years as a university instructor in the History of Art and for the past six years as a studio professor. She has taught more than a dozen different courses ranging from art survey to advanced and independent studies courses.  Her focus is primarily 18th, 19thand 20thcentury European and American Art, however, she often focuses on Contemporary art and Art and Gender as topics.  Within the studio art curriculum, she has taught drawing I and II, as well as Painting I and II, Design I and II along with independent advanced studies courses. Her exceptional teaching qualities have been rewarded as she was nominated best adjunct professor 2008-2009 and then named best adjunct professor at the University of Texas at Arlington in 2010 in the History of Art.

Ms Ingleright-Telgenhoff’s paintings, drawings and sculptures are hanging in several venues in Texas.   She is on permanent view at the Old Post Office and Museum in Graham Texas as well as the Fort Worth Community Art Center in Fort Worth.  She is frequently requested for exhibition by several galleries in the Dallas/ Fort Worth metroplex, including RO2 Gallery, Fort Worth Community Art Center, Craig Head Green art Gallery, 500X in Dallas and Gallery 411 in Fort Worth.   She won several student awards and competitions for her art within the state of Texas which include recognition of up and coming artists and has served as a competition juror in several venues.  Ms. Ingleright-Telgenhoff also served as vice president for nonprofit Fire House Art Gallery in Weatherford Texas for a year and was a member for more than six years prior.