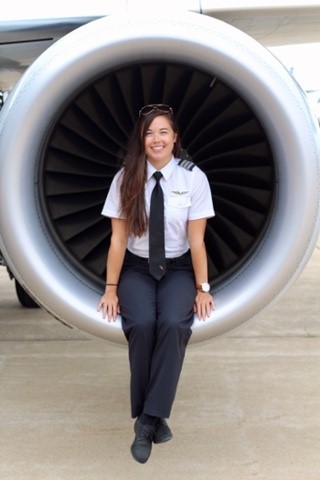 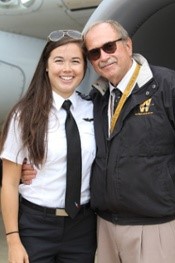 The thrill of piloting is to be in command -- to be the one behind the controls, calling out directives, the one people look to for advice and guidance. This is so important to pilots that they track their time as “pilot in command.” But the command aspect goes beyond being the authoritarian behind the yoke. For some, being in command begins when individuals take control of their lives and begin charting their own destinies.

Captain Nicole Mott is one of these people. As a new captain with Envoy Air, finishing her upgrade at the end of 2017, Mott has embarked on the next phase of her career. Charting her course from the time she was a junior in high school, Mott has navigated herself from point A to point B – all with one driving purpose: to fly airplanes and work for a major airline. 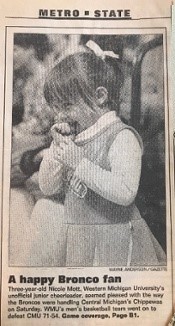 Mott was destined to be a WMU Bronco. Growing up with two WMU alumni as parents tends to result in some slight brainwashing (but only a little bit!). From her earliest memories, she remembers dressing up in her Bronco cheerleading outfit and attending WMU football and basketball games. However, it was another early adolescence experience that proved to be life-changing. Mott recalls, “My first experience with flying was when I was young. A family friend owned a Cessna and took me for a ride. Apparently, that flight must have stuck with me all these years!” To the young child, it was just a cool day in an airplane. For the future Captain Mott, it was the planted seed just waiting for the day it could bloom.

Before graduating from Parchment High School in 2009, Mott had spent some time contemplating careers. Even though she fondly recalled that experience in the Cessna, the thoughts of an aviation career weren’t part of the conversation. However, that all changed her senior year. “My high school participated in a program called EFE, or Education for Employment,” Mott said. “One of the programs offered a focus on aviation, I applied and got selected to participate. I was hoping to gain a little more insight about becoming a pilot."

During the summer of 2008, she attended the Aviation Summer Camp at Western Michigan University. “That was probably the first time I remember being at the controls of an aircraft,” remembered Mott. “The experience really provided me the opportunity to understand what it takes to become a pilot.” In addition to gaining valuable insight in relation to aviation, she also gained the invaluable lesson of networking within the industry. “I met a number of flight instructors at the camp as well as made some very good friends, many of whom I’m still in contact with today,” stated Mott. From then on, she knew: aviation was what she wanted. The seed that was planted all of those years earlier was beginning to grow.

Before finishing high school, Mott jumped in and took control. Knowing she wanted to become a professional pilot, her first step was to obtain her private pilot's license. Learning to fly was exhilarating, providing many lasting memories. “One of my favorite memories?” thought Mott.  “My first solo out of Allegan Airport. It was really windy that day and winds were favoring the grass strip, so I soloed off of that. What an amazing feeling to be alone in a plane for the first time.” 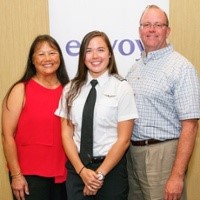 Graduating from high school meant taking the next step. For the offspring of two great Bronco alumni, Mott originally found herself at a different college pursuing her aviation dream. However, the “Force is Strong” in Broncoland and Mott found herself transferring back to WMU at the beginning of her sophomore year. (Thanks Tim and Annie Mott!) For Mott, looking back on the decision, it just made sense, “Throughout my time at Western Michigan, I made many friends, flew top-of-the-line aircraft and received a quality education that got me to where I am now.”

WMU gave Mott many great memories. “I had a long cross country to Niagara Falls in the Piper Seminole. I took my mom and grandma. We flew there, had a little while to look around and see the falls. We then flew to Cleveland where we were able to meet up with my brother for dinner. Then flew back to the College of Aviation, all in the same day.” However, she would be remiss if she didn’t mention her study-abroad program and experience in China, her time as a member of Alpha Eta Rho, and the many life-long friends made at the University. “But, I can’t forget,” she exulted, “the cross-country flight we would make to Midway Airport for Chicago pizza!”

As a female in a world that has been predominantly dominated by males, Mott soon learned the importance of strong female leadership and mentors. “Lori Brown was one of my favorite professors,” said Mott, “not only because she is an excellent mentor in and outside of the classroom, she is also a leader in this industry.” The influence of Professor Brown would have a direct impact on how Mott engaged the industry later in her career. Understanding the importance of mentoring and connection, Mott would soon emulate the lessons learned through her interactions with Brown.

Having decidedly taken control of her career path, Mott wasn’t done yet. As she closed in on her graduation from Western Michigan University and the Lee Honors College with a degree in aviation flight science and a minor in Chinese, Mott “Grabbed the Reins” and obtained her certified flight instructor rating. “I knew I had to have it. As a pilot, we all have to build hours,” she said. “For me, the best way to do that was to teach others to fly.” Mott spent her remaining time at WMU working as a CFI and finishing her degree, graduating December of 2012.

It was now time to grab that yoke and take control. Having spent most of her life in the Kalamazoo, Mich., area, Mott packed her bags and headed to Dallas, Texas, where she continued to instruct at a local flight school. In June of 2014, Mott was hired by Envoy Air as a pipeline instructor (a program that allows CFIs to get hired while building flight hours). However, she soon eclipsed the magic number all WMU flight students covet – 1,000 hours! It was her time to make the next move. The seed planted all those years ago had been nurtured and was ready to blossom.   She entered first officer training in September of 2014, and soon after she experienced another one of her memorable moments: her first flight as a commercial airline pilot! Thinking back, she recalled, “It’s crazy to think a pilot’s actual first flight behind the controls are with 65 people in the back. All of whom have no idea it's your first time!”

As a first officer, Mott started flying the CRJ-700 out of New York. She then transitioned to the E-145 in Dallas. Having just upgraded to captain, she is now flying the Embrear 175 and is based out of Chicago. “It's amazing that no matter where I travel to,” she stated, “I always run into many Western Michigan grads everywhere I go!

With a fondness of travel, Mott has seized the perks of the job, leveraging them to her benefit. Said Mott, “The journey from my very first flight until now has been absolutely amazing and I could not be happier with the path that I chose. I get to travel all over the world and see things that only a pilot would be able to see. The views truly never get old!” She also continues to be very active traveling the country when not commanding an aircraft. Recently, she has traveled around Europe, Peru, and all over the United States. She also has had the honor of flying around Gary Sinise and the Lt. Dan Band!

However, everything in life is balance. For all of the positives, there are challenges. “The biggest challenge about my job is the schedule,” said Mott. “It's not a normal 9-to-5 job with weekends and holidays off. It's extra difficult during the holiday season because I'm not able to be with my family.” Even with the challenges, Mott wouldn’t “trade it for anything,” she said. “The best thing about my job is that I get paid to see the country and literally have the world at my fingertips when not working. I've seen some amazing views from the flight deck!” 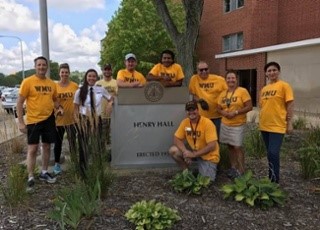 Understanding the pros and cons, Mott sees the opportunity to spread the wealth of knowledge she has gained during her time in the industry. Part of that includes outreach to the WMU College of Aviation. “I love coming back and seeing old faces at the CoA and meeting new ones too,” stated Mott. “I enjoy helping people just entering the industry. When I started, it would have been awesome to know more people at the commercial level, getting an understanding of what to do and what to expect.” Putting her money where her mouth is, Mott has been a familiar face around the campus. “I want to try to encourage more people to be a part of aviation because it's one of the best jobs out there.”

Although Mott has commanded her career into the left seat at Envoy Air, she isn’t done yet.  Her long-term goal is to fly for a major airline.  As an Envoy Air pilot she is well suited for a position with American. Tentatively, she is scheduled to flow-through to American Airlines by early 2021.  But let's face it, while she will enjoy every minute in the right seat, she wants to control those big birds at American. It is only a matter of time before we see Captain Mott at American Airlines. While it may be a cliché, Mott easily proves, the Sky is the Limit!