Torqued Off, and Loving Every Minute of it! Meet American Airlines Aircraft Mechanic Simi Razvi 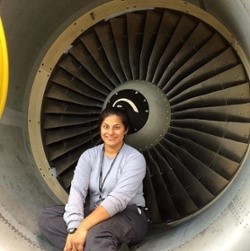 Applying pressure – whether in life or on the job – is an art form. Apply too much pressure and cracks will develop; not enough and things can unravel. The trick is using the right tools, knowing what needs to be torqued, and, most importantly, realizing the appropriate time and place to execute. Simi Razvi epitomizes the contemporary aircraft-maintenance tech in the world of high-skilled, modern-day aviation. She has leveraged her time in education, pushing and applying pressure when needed, advancing her career to American Airlines at warp-like speed.

In aviation technical operations, one of the coveted career paths is working at a major airline. This is where the airframe and powerplant mechanic gets to work on the big birds: overhauling engines (some of which have more horsepower than all of those aboard the Titanic) examining the structural integrity of the jet, maintaining electrical systems, problem-solving the hydraulics on the aircraft, and so much more. However, it takes drive, determination, and an understanding of networking to get there. 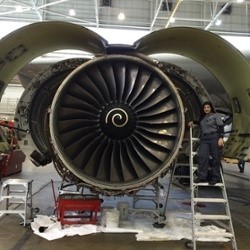 Growing up in Detroit, Razvi was the typical kid. However, one fateful opportunity pointed her in a direction that would have a profound impact on her life. As Razvi remembers, “I was fortunate. When it came time to for high school, I attended Davis Aerospace Technical High School, which was located at the Coleman A. Young International Airport in Detroit. Davis Aerospace was heavily aviation-oriented, so it was hard not to get hooked! The more I learned about aviation, the more I wanted to make a career out of it.”

“There are a lot of things that come to mind,” she says. In particular, she remembers her time in the aircraft-systems course. “There have been many occasions while troubleshooting systems when this class came in handy. Lately, we’ve been having a lot of issues with improper hydraulic quantities and pneumatic systems because of the weather. I troubleshoot these systems just as I did in class.”

To say this would make her WMU professors happy and proud is an understatement! Razvi thinks about the impact two WMU professors had on her education: Jeremy Hierholzer and Dr. Gail Rouscher. “Jeremy’s classes were far from boring and very hands-on,” Razvi says. “He taught from a real-world standpoint, which really helped me understand the material better and apply it to my career. He also helped me get into Virginia Tech’s Master in Information Technology program.” Razvi also offered accolades to Rouscher. “Gail took the time to help me improve my riveting techniques, especially countersinking rivets. I remember being frustrated a few times and she was always there to help.” 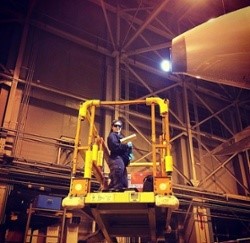 However, as with many students, while the academic portion of the degree was important and provided memories, Razvi’s favorite involved social involvements. “My favorite memory at WMU is when I was in the Professional Aviation Maintenance Association (PAMA) and we took a tour of Detroit Metro’s Delta TechOps facility,” she recalls. “It led to me completing an internship in the fall and helped get my foot in the door of a major airline.”

As she evolved in the WMU program, Razvi also developed a keen understanding of networking and getting involved. “I was a part of many aviation student organizations at WMU, which is a great thing to do,” she says. “I was a member of Women in Aviation - WMU, Association of Women in Aviation Maintenance, the Multi-cultural Association of Aviation Professionals (now the Organization of Black Aerospace Professionals – WMU), PAMA, and the Aviation Student Council.”

Razvi’s commitment to these organizations was intentional. Her insights into the industry were strong, knowing the importance of becoming an active participant. “I didn’t want to scoot by doing the bare minimum,” Razvi recalled. “I wanted to be a part of the aviation community and to make a difference. Some of the best advice I can give to future aviation students is to be a part of at least one aviation student organization at WMU, if not more.” That’s called networking with a capital “N.”

Graduating from Western Michigan University in December of 2013, Razvi set out to apply some of her own pressure on the aviation industry. Parlaying a couple of internships at Delta Tech Ops and Duncan Aviation, where she held her first job as an airframe intern, Razvi soon matriculated to the Big Leagues, becoming an aircraft mechanic at American Airlines. Razvi smiles thinking about what she loves about the career. “I get to learn new things every day,” she says. “Every aircraft that comes in can have a completely different problem than the last, but the fun part is trying to figure it out. The reward is when I can confidently sign it off in the morning and everyone is happy.” 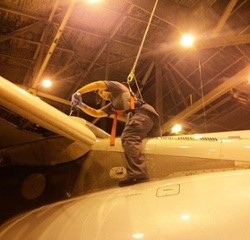 However, there are a few thorns in the rosey world of aviation maintenance technology. Two are the weather and schedule. “I work outside at night, regardless of the weather. If there’s a wind chill of -6 and there’s a tire that needs to be changed, that’s when Under Armour and hand warmers are your best friends.”

Those few negatives are significantly outweighed by the positives. Not only does the career provide the cognitive stimulation and problem solving Razvi desires, she also gets to do some pretty cool things. “Currently my best memory is when I got qualified on taxiing the Airbus A320,” she says. “We joke about being ground pilots: we taxi the aircraft around the airport, but we can’t take off. There’s so much to learn about an aircraft when you experience it from the cockpit while running the engines or taxiing. I am now qualified to run/taxi the Airbus A319/320/321 and Embraer E190 fleet.”

Razvi is now living in Woodbridge, VA and working at Ronald Reagan Washington National Airport (DCA). The benefits of living and working there are numerous. “It’s a small hub, so everyone knows everyone,” she says. “It makes it much easier to learn and work when you have pretty much anyone to turn to for help. It’s like a family at work.”

Settling into life in the Metro D.C. area, Razvi has extended her personal family. In addition to spending time with her boyfriend in places such as Bermuda -- “The perks of working for an airline,” she also keeps two lovable dogs: Diesel and Viper. While aviation does dominate her life, she also knows the importance of taking a break from it periodically – she recently purchased a motorcycle. Based on her talents, you know how well that machine performs! 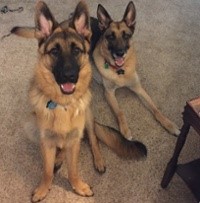 Razvi has a clear vision of her future. “My goal is to move up the ladder into management in the field of aviation,” she says. “As a lead mechanic, I have made a lot of changes and improvements to our operation to the point where our director of maintenance in Charlotte noticed. He encouraged me to apply for the next supervisor position. I don’t want to make waves or ruffle feathers per se, but I want to make a difference so the mechanics, passengers, and management are all happy.”

Razvi has solid advice for anyone contemplating a career in aviation maintenance technology. “If you can get into a major airline early on, GO FOR IT!” she believes. “Yes, you’ll be working nights and won’t have the weekends off, but it will make your degree worth it.” However, she would be remiss if she didn’t also decree the aviation battle cry -- “NETWORK, NETWORK, NETWORK!” “It’s not always about what you know, it’s about who you know. Make yourself marketable. Be a part of student organizations and meet managers from airlines or aviation companies.” 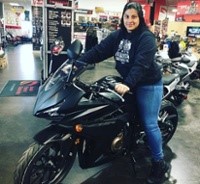 Reflecting on her brief time in the industry, Razvi truly advocates the importance of exploration “Figure out if you want to be in general, corporate, or commercial aviation. Even if you don’t plan on going into (aviation) management, having a degree is worth it,” she says. “Most importantly, don’t give up and always be honest in your work. There are so many routes you can take in the aviation industry. If you find one that speaks to you, you’ll never work a day in your life. The possibilities are truly endless.”

Who said being torqued off was a bad thing?