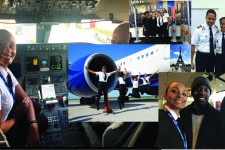 When it came to a career in aviation, Alexis Brown always seemed to know she was on the right "track." During their college careers, her parents competed in that sport and, listening to their stories about travels and meets while growing up, she wanted to follow in their spike marks as well. Good enough as an athlete at LakeVille Memorial High School in Genesee County, Brown earned a track-and-field scholarship to Western Michigan University. The aviation part of the equation was spawned a little earlier when Brown was a youngster in her hometown of Otisville, a small hamlet northeast of Flint. 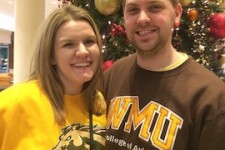 Epplett spent about nine years at the WMU College of Aviation as a student and staff member. He earned a bachelor's in aviation science and administration in 2012 and, while employed by Western, added a master's in sports management in 2015. He joined the College of Aviation's recruitment and outreach team right after his first degree was hanging on the wall. Since then, he has joined Kalitta Air, based at Willow Run Airport in Ypsilanti on the east side of the state, as an international flight-clearance coordinator. 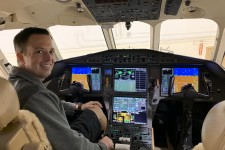 Following his 2009 graduation from Kalamazoo Christian High School, Patterson didn't have very far to soar to realize his goal. By 2018, he had completed degree work at the Western Michigan University College of Aviation with a major in aviation maintenance technology and a minor in business management. He prepped for his current post by working at Duncan Aviation as an airframe technician, first as a summer intern, then part-time as he completed his degree, and even full-time upon graduation. 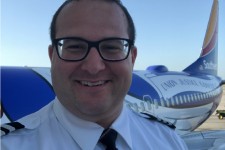 Commuting to a job is a reality for many American employees, but only a pilot would agree to an Orlando-to-Billings junket to get to work. That's what Jonathan Miller did as part of reaching his goal to become a commercial pilot. Timing is said to be everything, but that dimension wasn't working at all for Miller when he graduated from the Western Michigan University College of Aviation with degree in aviation flight science in 2008. 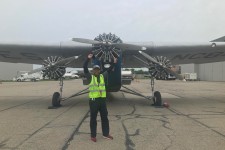 For decades, The Dominican Republic has been exporting to the United States scores of talented baseball players with the ability to send white spheroids on long, majestic flights.  Thanks to the Western Michigan University College of Aviation, Miguel Del Rosario, whose former home is the capital city of Santo Domingo, was able to polish and train his skills so that people can enjoy safe and secure flights all over the world. 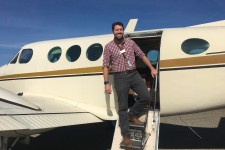 Tom Souder's traveled from Minnesota to Michigan to pursue a degree in Aviation Technical Operations.  The recent alumnus is currently working for GE Aviation and loving every minute of it. 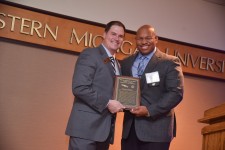 Meet Randall Rochon, a 2002 graduate of the Western Michigan University College of Aviation and a founding member of the campus chapter of what is now known as the Organization of Black Aerospace Professionals - WMU (OBAP).  Being once there himself, he knows the bumps and turbulence a student can encounter when in pursuit of a career in the aviation industry.  That's why, despite a hectic and busy schedule as a United Airlines (First Officer) based in Newark, N.J. and all kinds of volunteerism for the OBAP, he finds the time to mentor and counsel the college's current enrollees. 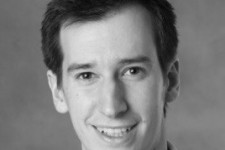 While a number of people think aviation runs on jet fuel, most know the management of assets is what keeps the birds in the sky.  Growing up in Saint Clair Shores, Michigan, Warner was your typical kid. With one difference, “Ever since I can remember, transportation fascinated me,” he said. While it isn’t uncommon for young children to become interested in cars and trains, Warner began fixating on other things. “For me,” he said, “airplanes were the coolest. I always enjoyed airports, airshows, and just being around aircraft. I remember always reading about airplanes. The truly interesting part, I came from a family of non-aviators, so it’s hard to understand exactly how I became so interested in aviation – but I’m glad I did!” 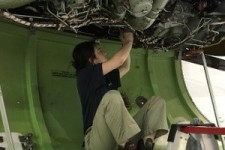 “Space: the final frontier.” For many, these famous words echoed out of television and movie screens, providing viewers the opportunity to passively engage in outer space exploits. For some, the words acted as a magnet, drawing the individuals towards the human quest to explore and colonize the space immediately beyond Earth’s atmosphere. For Margo Vriesinga, the call of the final frontier would come after a journey that took her from cars to complex jet engines to Virgin Galactic! 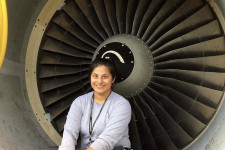 Simi Razvi epitomizes the contemporary aircraft-maintenance tech in the world of high-skilled, modern-day aviation. She has leveraged her time in education, pushing and applying pressure when needed, advancing her career to American Airlines at warp-like speed.