For many children, the dream of aviation begins the first time they fly or their initial encounter with an airplane. The wonderment produced by being in the presence of these magnificent pieces of machinery has a profound effect on many young individuals. For some, the introduction to aviation is a passive encounter. For others, the world of the pilot is an active, engaging experience. Brad Coffman grew up in the latter.

Battle Creek, Mich is many things. For some, it is the fictional home of a recently cancelled television show. For others, it is none other than Cereal City, USA. However for Richard Bartlett, Battle Creek, Mich was aviation mecca. It was the city that offered him the access to the key that would unlock the world for him.

Kentucky is famous for its bourbon distilleries, bluegrass music, a certain Colonel who made chicken “finger licking good,” and horse racing. In the state are the city of Louisville and the Louisville International Airport, which was chosen in 2005 as the UPS heavy airfreight hub and a 235-foot air traffic control tower. Climbing the 22 stories on a regular basis is Bronson Barth, Western Michigan University alumni, Air Traffic Controller and aviation enthusiast.
Competition has a way of motivating people. From Pop Warner football to the National Spelling Bee, the thrill of going head to head against a peer has always roused individuals to be their best. In collegiate aviation, the National Intercollegiate Flying Association has had the same impact in the aviation industry. The competitive nature of the NIFA SAFECON events has elevated aviation professionals for nearly 100 years. 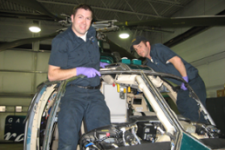 People often asked Hank Williams Jr. why he did certain things -- a lot of them bad. In song and verse, Hank provided one of his trademarked replies, saying he was simply carrying on the “family tradition.”

Growing up in the northwest section of the United States, several things are hard to ignore: the Seattle Seahawks, Starbucks Coffee, Microsoft, the birthplace of Grunge and Boeing. For Marcus Williams the influence of the aerospace giant would have a profound effect on his upbringing, leading him to the place he is today.

Happy New Year, although a bit late, to our aviation family and friends. I’ve got some really exciting updates to share with you and welcome any feedback or conversations you might like to have.

Seventy-five years of aviation at Western Michigan University and what the next quarter of a century will bring was celebrated Oct. 24 in Battle Creek. As Frankie Valli and the Four Seasons said in that memorable song, “Oh, what a night” and what a night it turned out to be.

Excellence in Diversity award - Captain Albert Glenn. The award recognizes individuals or organizations who have demonstrated a significant impact on helping to increase diversity in the field of aviation.