Scott knew from a young age he wanted to be in the aviation industry. He grew up in Lawrence, Michigan where across the road from his home was a small grass strip. He would watch the small airplane fly in and out of the airstrip and it solidified his future in aviation.

Wow! What a week.  This year's Women in Aviation conference was the best Bronco attended event of the last fire years.  Over 20 current students galloped down to Tennessee to network, interview, and gain valuable exposure.

Born and raised in Muskegon, Michigan, Anne graduated from North Muskegon High School in 2000. She knew she wanted to be a pilot when her family went on vacation and they had to fly- the flight was her favorite part of the vacation. 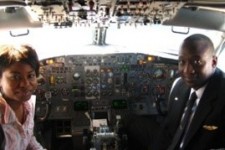 Donald was born in New Orleans, Louisiana and grew up in Houston, Texas. He knew he wanted to be in aviation since he was 6 years old. He graduated from Williwridge High School in Missouri City, Texas, a suburb of Houston.  Donald attended Texas Southern University and earned a bachelor’s degree in Aviation Management in 1999.

Kelly was born in Los Angeles, California and raised in Battle Creek, Michigan. She graduated from Battle Creek Central High School. Kelly always loved flying ever since her first airplane ride to California as a child.

Michael was born in Maui, Hawaii but spent most of his life in Grand Rapids, Michigan. He graduated from Forest Hills Central High School in 1999 and joined the Michigan Army National Guard. Michael knew he wanted to be in aviation when he was in high school and used to drive to the “viewing area” near the Gerald R. Ford Airport in Grand Rapids to watch planes take off and land. 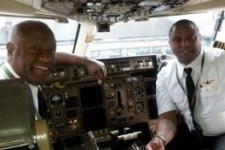