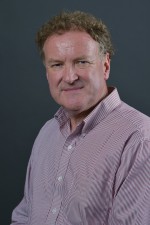 Became Program Manager to the National Diploma in Aerospace Studies as Engineering Licensing transitioned to JAR 66. After 10 years he joined Western Michigan University in January 1999 teaching Aerodynamics and Aircraft Systems to the international students (British Airways, Air Lingus and Emirates) at the International Pilot Training Center at Western, and now teaches aerodynamics and performance both at freshman and advanced level along with aircraft systems.

He attained his FAA PPL in 1990 and now holds a JAA CPL. He has grown up playing rugby at school and rowing outside of it. He continues to coach soccer which he has done for many years in Battle Creek and is on the board of the local American Youth Soccer Organization. He met his wife whilst at the American School and now has two children.