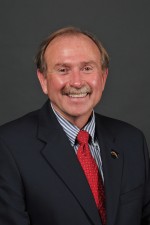 Powell is a 1975 graduate of Arizona State University. He entered active duty military service in the Air Force upon graduation. At separation from the Air Force, he was a member in both the Air Force Reserves and the Air National Guard flying the A-10 and A-7. In 1986 he went to United Airlines and in the domicile structure he was a flight manager, assistant chief pilot and instructor chief pilot at Chicago O’Hare Airport. He was also the chief pilot at Miami International Airport and San Francisco International Airport. In August 2003, Powell was hired by Western Michigan University’s College of Aviation to be the assistant dean and director of operations. In July 2007, Powell was appointed to serve as interim dean until the dean appointment was made official in July of 2008.