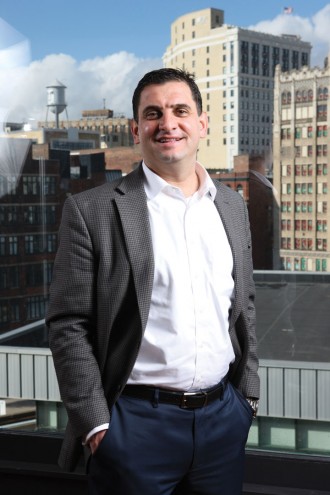 Imagine a world where water management is not an issue—where fields and food sources are protected, where freshwater is abundant yet standing water is not, where diseases like cholera and malaria are choked off at their source.

Greg McPartlin, B.B.A.’97, chief executive officer at Parjana Distribution, knows that just such a world is possible. Parjana Distribution has developed a solution with its Energy-Passive Groundwater Recharge Product, EGRP®, an innovation that manages surface and underground water in a sustainable way.

Designed to reduce surface runoff by increasing infiltration in much the same way it occurs in a natural environment, the EGRP® is a five chamber tubular extrusion that works to facilitate the movement of water from the surface to the adjacent soil matrix. Water is distributed evenly, flowing more freely and influencing soil surface conditions.

And with estimates that 47 percent of the world’s population will live in areas of high water stress by 2030, water management is an issue of increasing importance and urgency.

Parjana’s mission is to create a paradigm shift in how the world manages water that will forever change the food supply, water supply and human population by creating equilibrium and stabilizing moisture levels within the earth.

The results of the company’s work can be seen in more than 140 projects including the Coleman A. Young International Airport and Belle Isle in Detroit, The Cincinnati Reds’ Brandon Phillips Field, and the Edgbaston Cricket Field in the U.K., among others.

"My education at Western gave me the foundation to strive to learn more and to create a mentality of not asking why, but asking why not?"—Greg McPartlin

What began as a homeowner waterproofing technology has now found application in a much broader context, and McPartlin sees the opportunity to apply the technology to mitigate the issues of infiltration,evaporation and surface runoff worldwide. “Parjana positions itself as a facilitator of thought leaders within the water sector who create ‘an-innovative-solutions-based-approach’ to water management,” says McPartlin. “Throughout history, we have simply moved a water problem from one place to another, solving one issue while creating another issue downstream. Due to mass urbanization and the creation of non-permeable surfaces, the earth’s natural processes are out of balance. Parjana restores that balance.”

And the start of McPartlin’s passion for bettering the world began at WMU. “My education at Western gave me the foundation to strive to learn more and to create a mentality of not asking why, but asking why not? Why not change the world? Why not see the world? To change the world you have to understand it and to understand the world you have to see and feel it. That is what led me on my quest for global perspective through travel and education. My travels have taken me to 50 some countries, and I spent well over three years out of the U.S. World travel rewires your brain and creates empathy for others and enables you to think differently.”

What excites McPartlin most about the future of Parjana is its application in developing nations and low-resource settings. “Parjana’s ability to mitigate standing water changes everything. Surface-water-related disease is still one of the chief dangers in much of the world. Without surface water, those diseases may cease to be a threat. This, along with agricultural applications that eliminate the need for drain tile, will be Parjana’s lasting legacy.”