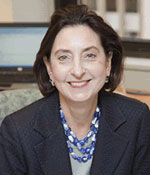 Birgit Klohs graduated with a B.B.A. in finance from Western Michigan University. She is also a graduate of the Economic Development Institute of the University of Oklahoma, has completed the professional economic development finance program through the National Development Council, and attended Harvard University’s program on negotiation.

Her economic development career began in 1977 as an industrial consultant with the Economic Development Corporation of Berrien County, Mich.  She then joined the Michigan Department of Commerce as an account executive for the West Michigan region. After working with the Prince Corporation in Holland, Mich., Klohs joined Grand Valley State University, where she served as assistant director of the Office for Economic Expansion.

Klohs serves as president and chief executive officer of The Right Place Inc., a position she has held since 1987. The Right Place is the regional economic development organization dedicated to the retention, expansion and attraction of businesses in the West Michigan area.

During her nearly 25-year career at The Right Place, Klohs has organized numerous trade missions to Europe, the Far East and Israel. She is also a frequent speaker at national and international economic development conferences and seminars, having lectured in France, Great Britain, Germany, Sweden, China, Australia and Israel. Most recently she participated in the Clinton Global Initiative - America.

Klohs holds many leadership positions and currently serves on the board of directors for Spectrum Health Systems, Macatawa Bank, ADAC Automotive and the Grand Rapids Area Chamber of Commerce. She also serves on the Committee on Small Business, Agriculture and Labor for the Federal Reserve Bank of Chicago, the Local Development Finance Authority, the Grand Action Executive Committee, the Grand Rapids Convention and Arena Authority, Van Andel Public Museum and the Michigan Israel Business Bridge Advisory Council. She is past chair of the WMU Board of Trustees and the Economic Club of Grand Rapids.

Klohs has won more than 25 prestigious awards for her professional accomplishments, including being named many times over as one of the most influential business leaders and dealmakers in the state and one of the most influential women in the West Michigan community and the State of Michigan. Her expertise in economic development is regarded among the best in the world.