The Western Dance Project is the touring ensemble of the Western Michigan University Department of Dance. This group of 10 to 12 students provides concert performances, lecture-demonstrations and master classes in schools, community centers and at festivals statewide, regionally and nationally. Each year students learn repertoire from guest choreographers from across the United States. Department of Dance alumni are also engaged to create dances for the ensemble. 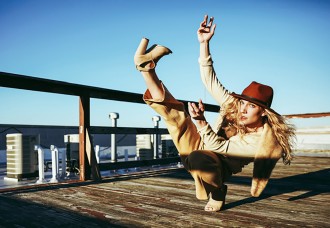 Jackie worked as a part-time faculty member at Western Michigan University's Department of Dance, and for the past ten years had taught all over the New York dance scene including being on faculty at Peridance Capezio Center, and guesting at Steps on Broadway and Broadway Dance Center. Her athletic, daring, and unique approach to movement has also landed her numerous master classes and conventions throughout the united states and even internationally in Rome, Italy. She is currently on faculty at Visceral Dance Center and guesting at Lou Conte Dance Studio in Chicago and is also on faculty for celebrity dance conventions, turn it up dance challenge, and stage door workshops, specializing in contemporary and improv classes.

Jackie is also the artistic director of her own contemporary dance company based out of New York and Chicago, Now Dance Project. Her choreography has been commissioned by numerous colleges, dance companies, studios, and universities including The Ailey School, Elon University, The Hartt School, Salve Regina University, Western Michigan University, Urbanity, The Peridance Certificate Program, and many more. Jackie’s work has received numerous acclamations and awards and was even selected to perform at The Kennedy Center in Washington, DC, for the American College Dance Association's 2016 national festival. She also judges for numerous dance competitions in the U.S. and Canada and is a nationally certified personal trainer.

For more information about the Western Dance Project, contact Artistic Director Whitney Moncrief at whitney.moncrief@wmich.edu or (269) 387-5826.