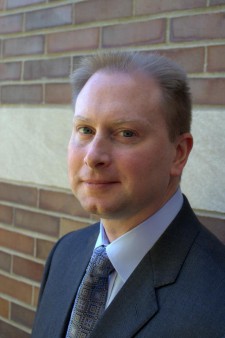 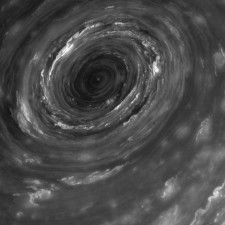 WMU doctoral student Shawn Brueshaber is interested in planets. Very interested. And NASA noticed. Brueshaber, who is working on his Ph.D. in mechanical engineering, recently received a NASA Earth and Space Science Fellowship.  Of the 180 applicants in the fellowship’s planetary science research division, he was one of only 28 selected to receive the $30,000 annual award.

Brueshaber is studying the polar vortices of Jupiter, Saturn, Uranus and Neptune, looking at atmospheric and planetary variables and using numerical simulations to determine if a polar vortex is favored and the fluid dynamic characteristics of the vortices.

“Of all the vortices in the solar system, Saturn’s most resembles a terrestrial hurricane and may be fed by thunderstorms, like a hurricane on Earth,” Brueshaber explained. “It is probably a permanent feature despite being completely in shadow for seven years in winter and completely illuminated for a 7-year summer.  Neptune, on the other hand, appears to have a large, warm-core, but transient polar vortex.”

He said Jupiter’s polar environment is a mystery. “Only one spacecraft and no ground-based telescope has ever clearly glimpsed Jupiter’s poles,” he said. “Some have predicted no polar vortex will exist there but the Juno spacecraft arriving this summer will solve the mystery.”

Why the differences in the polar atmospheric dynamics of these worlds?  Brueshaber is looking at what combinations of planet size, rotation rate, and vertical temperature profiles favors or suppresses the emergence of a polar vortex.

Western Michigan University does not have an atmospheric science or planetary science department, making this particular NASA fellowship rather unusual for a WMU student. Brueshaber credits his advisor Dr. William W. Liou, professor of mechanical and aerospace engineering, for finding a way to fit his research interests into the doctoral program. Liou approached a planetary scientist at Hampton University in Virginia, who agreed to aid Brueshaber’s research.

“This work fits in nicely with what we do in the computational engineering physics lab,” Liou said. “Receiving this highly competitive fellowship is a reflection on Shawn’s rigorous work and dedication.”