I Know Nothing about Uranus (or Neptune) and Neither Do You: Why We Must Explore the Ice Giant Planets

Uranus and Neptune, collectively known as the “Ice Giants” are the outermost major planets of the solar system. Voyager 2, the only spacecraft to visit Uranus and Neptune, did so more than 30 years ago. Our only observations of these planets are made infrequently by the Hubble Space Telescope and a handful of ground-based telescopes. The mysteries surrounding the interior structures, magnetic fields, atmospheres, rings, and moons of the Uranus and Neptune systems have only deepened since the discoveries returned by Voyager. As an example of our profound lack of knowledge of the Ice Giants, the mechanisms behind their formation remains so poorly understood that models cannot explain how they came to be. And yet, the majority of the 4,000 exoplanets discovered so far match the size and mass of Uranus and Neptune. Clearly, the planetary science and astronomy communities face significant gaps in understanding the most common class of planet in the galaxy.

The United States is the world leader in planetary exploration. The upcoming Decadal Survey conducted by the National Research Council, the National Academy of Sciences, and the National Academy of Engineering, will determine the priorities for spacecraft exploration for the next decade. An orbiter to either Uranus or Neptune was ranked third in the previous Decadal Survey but was not selected for a mission. Significant fiscal barriers exist for an Ice Giant orbiter mission due to competition for a Mars Sample Return, a possible Europa Lander, or a possible Venus mission. Due to the caprices of orbital mechanics, building and launching a mission to Uranus, and particularly to Neptune, will be challenging, but the payoff will be enormous. Profound and unexplained differences exist between Uranus and Neptune. Measurements required to answer key scientific questions regarding habitability, planetary formation, planetary evolution, atmospheric dynamics, internal dynamos, planetary composition, planetary migration, ring mechanics, and satellite activity can only be made by an orbiter and atmospheric probe. Nevertheless, more than science is needed. An engaged public will be instrumental in supporting any current and future planetary exploration to Uranus and Neptune.

This lecture will provide a brief summary of the state of knowledge of these enigmatic planets and the rationale for the United States and international partners to fund a dedicated orbiter in the coming decade. 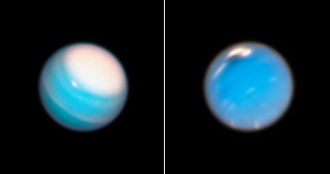 Bright and dark clouds and storms on Uranus (left) and Neptune (right) as seen by the Hubble Space Telescope in September 2018. Image via NASA/ ESA/ A. Simon (NASA Goddard Space Flight Center) and M.H. Wong/A. Hsu (University of California, Berkeley)/HubbleSite.