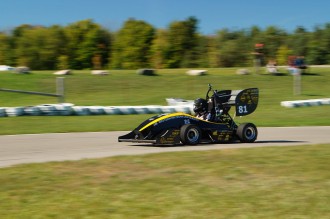 Western Michigan University’s Formula SAE team will have a chance to test its new Bronco Racing 2017 vehicle at Fiat Chrysler Automobile’s proving grounds in Chelsea, Mich., a month before it competes in the SAE International Collegiate Design Series in early May. “Being invited to participate in the Test and Tune weekend at Fiat Chrysler prior to the international competition is a huge opportunity for our team,” said Evan Weese, project manager of the Formula SAE team.

At the event, students will have a chance to test their vehicle, participate in a design review with FCA engineers, and network and interact with other university engineering teams.

“Fiat Chrysler engineers will be evaluating all portions of our vehicle a month ahead of time,” Weese said. “That will give us time to make any adjustments needed going into the competition.”

The SAE International Collegiate Design Series is a competition open to college students all over the world. Teams from Asia, Australia, Europe, North America and South America compete every year to see who can design, build and drive the most innovative vehicles. The goal is to create a competitive environment for college students to apply their technical theories to real world problems. WMU competes in the Formula Vehicle Challenge and the Baja Vehicle Challenge.

The annual competition at Michigan International Speedway attracts some 120 teams and is the biggest competition of its kind in the world.

“We were really excited to be invited to participate in the Test and Tune weekend before competing this year,” said Ramin Mirshab, engine team leader.

He described the 2017 car as the most advanced car to come out of the university. “There will be a lot of ‘firsts’ in it,” he said. He said Bronco Racing 2017 will have an increased lift -to -drag ratio, a lower center of gravity and an optimized powertrain. The new design also will include an intake manifold manufactured by using rapid printed nylon. “This rapid prototype intake manifold will weigh four pounds less than our 2016 model, and will reduce fuel consumption by increasing engine efficiency,” he said.

While the team continues working on the 2017 model in preparation for competition, members also recently exhibited the Bronco Racing 2016 vehicle at the Michigan International Auto Show in Grand Rapids. They did a PowerPoint presentation on advanced manufacturing techniques for Formula SAE vehicles and took home a $1,000 award. Both the Formula and Baja teams were displaying their vehicles at the highly attended annual event.

“These competitions are an excellent way for our students to network, showcase their vehicles and keep abreast of developments in the auto industry,” said Dr. Claudia Fajardo, advisor of the Formula SAE team. “They put so much work and so many hours into these vehicles. It’s gratifying to see them get recognition for their efforts.”