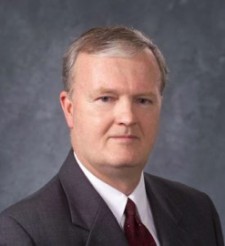 George was born in Greenfield, Massachusetts.  He attended the U.S. Naval Academy and graduated with a B.S. degree in operations research. He served 20 years between the academy, active duty and the navy reserves retiring in 1994 at the rank of Commander. During active duty and reserves he was a naval flight officer where his experience included tactical coordinator and mission commander of P-3 combat aircrews.

George joined Lear Siegler in Grand Rapids, Michigan in 1985 as a systems engineer where he obtained his master of business administration from Western Michigan University.  Lear Siegler was later acquired by Smiths Aerospace and subsequently by General Electric in May 2007.  His responsibilities with Lear Siegler and Smiths Aerospace included engineering line management positions through engineering director, programs director of large-scale integration programs, product line business director, vice president of the 787 common core system program, and vice president/general manager of 787 programs.  He continued in this role after the GE Aviation acquisition of Smiths and assumed the position of VP/GM Avionics North America in 2009. He assumed his current position in November 2016. He has been the site leader for the Grand Rapids facility since 2009.

George is married to Wilma and they have three grown children and two grandchildren. He enjoys spending time with his family, traveling together, scuba diving, and maintaining his country home.