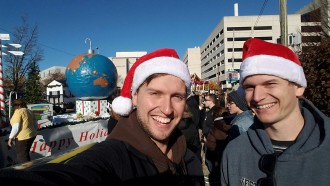 Graduate students Aaron Dean and Brent Kostich got into the holiday spirit early this year as they accompanied WMU’s float in Kalamazoo’s Holiday Parade, which is held each year in downtown Kalamazoo. The two mechanical engineering students, both working on their master’s degrees, spent about 60 hours designing and building a rotating fiberglass globe for the float.

“President Dunn’s office contacted the college for help in designing the globe for the WMU float,” Dean said. “We were up for the challenge.”

The two started with a 6-foot inflatable ball and covered it with layers of fiberglass and resin, one section at a time. They built a steel stand with a rotating turntable, mounted the globe, spinning it with a small electric motor and pulley.

“Riding on the float was surprisingly fun,” Kostich. “It was very satisfying to see the whole float come together the way it did, and work throughout the duration of the parade. And it was a treat to see all the young children’s excitement when they caught a glimpse of Buster Bronco, who was riding with us on the float.”

“We were excited to make a contribution and be able to help represent Western in the parade,” Dean said. “It was a beautiful day -- and a great day to be a Bronco.”

The Kalamazoo Holiday Parade, a tradition since 1961, had nearly 3,000 participants and 200 volunteers.