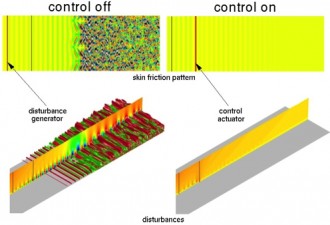 Numerical calculations were carried out to investigate control of transition on a flat plate by means of local dynamic surface deformation. Initially, the configuration and flow conditions were similar to those of an experimental arrangement that employed circular piezoelectrically driven actuators to impart small-amplitude local deformation of the plate surface. One actuator was located in the upstream plate region and oscillated at the most unstable frequency of 250 Hz to develop disturbances representing Tollmien–Schlichting instabilities. A controlling actuator was placed downstream and oscillated at the same frequency, but with an appropriate phase shift and modified amplitude to decrease disturbance growth and delay transition. After verifying the effect of control numerically, a more realistic implementation of actuators was then considered. The downstream controlling actuator was selected to be two-dimensional (spanwise invariant), and several forms of upstream disturbances were applied. These included disturbances which were strictly two-dimensional, those which were modulated in amplitude, and those which had a spanwise variation of the temporal phase shift. Direct numerical simulations were obtained by solution of the two and three-dimensional compressible Navier–Stokes equations, utilizing a high-fidelity computational scheme and an implicit time-marching approach. In the investigation, an empirical process was developed for determining the optimal parameters of the controlling actuator. Results of the simulations are described, features of the flowfields elucidated, and comparisons made between solutions of the uncontrolled and controlled cases for both circular and spanwise-invariant actuators. It was found that the disturbance growth is mitigated, thereby delaying transition for all forms of the upstream perturbations, substantially reducing the skin friction.