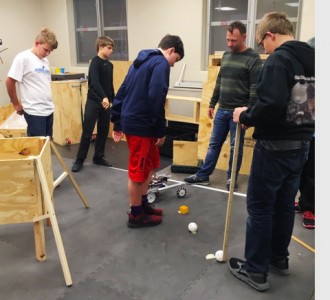 Sanford testing the robot with students. 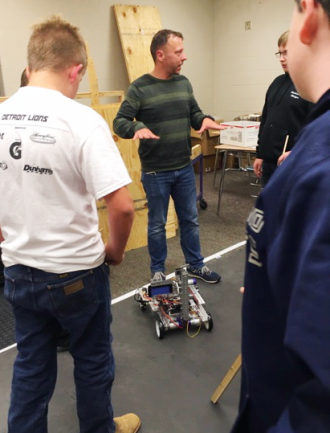 When Schoolcraft Middle School Robotics Club advisor Dr. Donya Dobbin realized the team’s robot would need to be programmed using JAVA, a skill no one affiliated with the club had, she knew just where to turn. Dobbin jotted off an email to Dr. Steve Carr, chair of Western Michigan University’s computer science program, asking if a College of Engineering and Applied Sciences student might be willing to mentor her students.

“Jonathan's involvement was vital,” Dobbin says. “Without him, we may not have been able to compete at all. The robot needed to be programmed using JAVA and I had no other mentor that had that knowledge.”

Sanford says this was a new experience for him and he got involved because it sounded like a fun extracurricular activity. Though busy with his own coursework, he traveled to Schoolcraft twice a week for two months to be at all the team’s practices. Sanford was with the team from the beginning as they dissected the game and developed a strategy through to the end of a successful season. 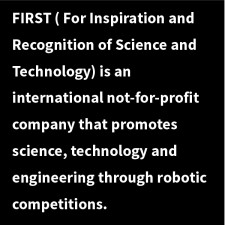 The successful season included competing in two FIRST Robotics competitions, one in Constantine, the other in Coloma. “The team made the elimination rounds in both events for the first time in the history of the club,” Dobbins says.

While at the competitions, Sanford assisted by tweaking the program code, so the robot would do whatever the team needed it to do. “None of the students had been introduced to programming,” he says. “I had to break it down and explain to the students. Students would tell me what the robot should be doing, and I would show them how to program it for that function.”

Now that Sanford has experience with the “fun and stressful” robotics competitions, he plans to be back helping the Schoolcraft team again next year. Helping to guide the team to a successful season was satisfying but most of all Sanford enjoyed working with the students. “I loved seeing the excitement on students’ faces and their reactions when the robot was doing something it wasn’t supposed to be doing,” he says.