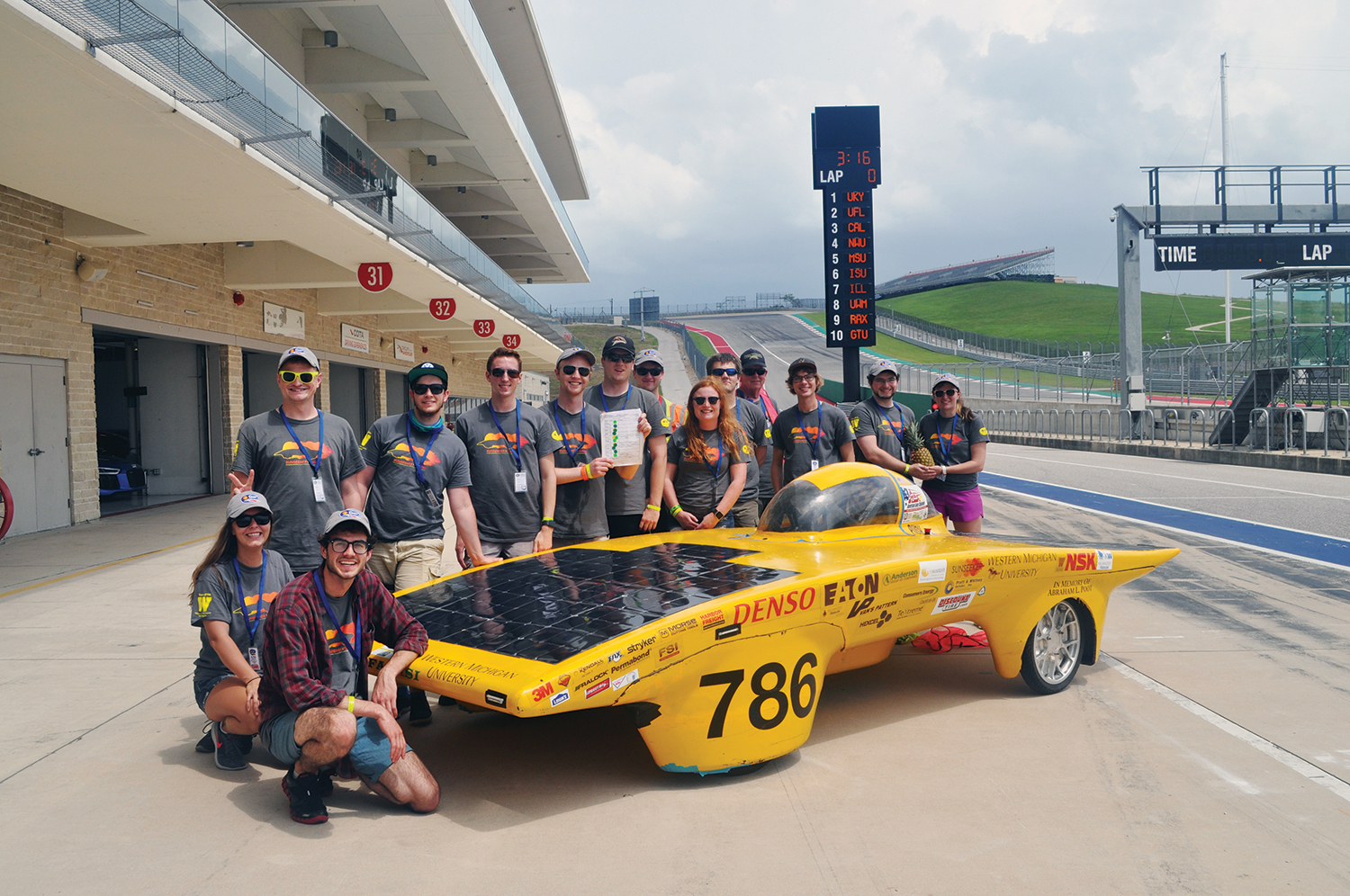 KALAMAZOO, Mich. – Western Michigan University’s Sunseeker team celebrated its 30th anniversary with an impressive performance at the Formula Sun Grand Prix in Austin, Texas. The team started the competition by earning 10 green stickers as the third team to complete the scrutineering process and finishing in fifth place overall.

Dr. Mitchel J. Keil, a Sunseeker team faculty advisor, says the students put their all into the race. “The team proved one thing for certain: This team has heart,” Keil says.

This year’s finish is a welcome return to the top-five in the single-occupant vehicle racing category at the FSGP – the first since 2014. It also capped the career of Sunseeker “Farasi” which has been active since 2016. The vehicle is expected to be retired and replaced by a new Sunseeker for the 2020 racing season.

The Sunseeker team encountered some challenges along the way to the fifth-place finish but used their engineering knowledge to resolve them all, says Dr. Bradley Bazuin, chair of the electrical and computer engineering department and team faculty advisor. "With the continuing evolution of car and race requirements and some known challenges based on the current car's design and construction, we encountered several issues that had to be overcome in order to race,” Bazuin says.

“These challenges included modifying the brake system to allow documentation of expected pressures and performance, brake line repairs based on overheating during a tow, horn adjustments for higher decibel rating, minor body repairs for attachment points, and additional labeling for conformance to required warnings on emergency switches.”

Team project manager and aerospace engineering major Kyle Lyman of Marshall, Michigan, says adapting to unexpected challenges is an essential part of the race. “There is a notion that nothing should go wrong, as you have just spent the last year preparing the car. Though, no matter how talented the team and no matter how innovative the engineering, things happen,” he says. “So, one of the most significant challenges to our success is being able to adapt to the situation and fix problems quickly.”

Teamwork above all else

Working together is a key to the team’s success, Lyman says. “The other major challenge is maintaining your composure during the chaos of the race. It's Texas, so it’s hot and humid. You are working 15-hour days where you are moving nearly nonstop, and you are thinking critically the whole time. It’s difficult to stay sharp for the entire race,” Lyman continues. “You also have to be cognizant of your teammates. In such a high-stress environment, you have to make sure that you are taking care of each other.”

Bazuin is impressed with the team’s cooperation and work ethic. “The students worked together to form a highly functional team for the race,” he says. “Problems and issues were quickly identified, and solutions collaboratively developed.

“Of note during the race, there was significantly improved telemetry data access and software that allowed a much closer monitoring of energy availability, energy use, and battery state-of-charge on a per lap basis," Buzuin says. "With this information, team members defined and followed a more advanced race strategy, allowing the team to maximize the number of laps achieved and continue running until the checkered flag on the final day of racing.”

Keil says that WMU’s Sunseeker team stands out from many of its competitors for how much of their car they build themselves. “Some teams have solar arrays built that may cost up to $1,000,000. Our array costs a little under $7,000 for materials, along with hundreds of student hours spent assembling and encapsulating panels for the array,” Keil says. “Our quality does not match that of a $1,000,000 array, yet we are competitive.”

This extra effort has led to further opportunities for some team members. “Because we build our array, we have attracted students interested in sustainability which has led some into research related to novel semiconductor development,” Keil says.

Always there to help others

While the team was busy working on their vehicle, they carved out time to support the on-track racing and assist other teams. Race organizers recognized them for volunteering for multiple shifts as race corner workers and providing help to other teams working on completing scrutineering and compete on the track.

“A unique aspect of solar races is the collaborative environment that exists. All teams are happy to provide significant help when other teams need it. This includes sharing spare parts and materials as well as students’ and advisors’ time so that as many team cars succeed, participate and race as possible,” says Bazuin. “As compared to highly competitive athletic competitions, it is unique to help and root for everyone.”