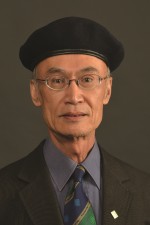 Dr. Edmund Tsang, Associate Dean for Undergraduate Programs and Assessment, has announced his retirement effective Dec. 31, 2017. Tsang joined the college in July 2001 in his current position as Associate Dean. While at WMU, he has been the Principal Investigator (PI) or Co-PI of externally funded grants totaling more than $6 million on engineering education and student success. Tsang will retire as Professor Emeritus of Mechanical and Aerospace Engineering and Associate Dean Emeritus of the College of Engineering and Applied Sciences.

During his time at the college, Tsang published -- with other CEAS and WMU faculty, staff and students -- three refereed journal articles and 18 refereed conference proceedings articles on engineering education. He also authored a textbook on engineering mathematics -- Introduction to Engineering Analysis: Applying Algebra II to Solve Engineering Problems --  which was published in 2016. Tsang was recognized with an Excellence in Service-Learning Faculty Award in 2012; Faculty Fellow of Lee Honors College in 2010; Phi Kappa Phi-WMU in 2005; and the Platinum Award by the WMU Division of Multicultural Affairs in 2002.

Tsang received a Bachelor of Science (distinction) in Mechanical Engineering from the University of Nebraska, and a Ph.D. in Metallurgy from Iowa State University. Dr. Tsang was a post-doctoral researcher fellow in the Institut fur Atom- und Festkorperphysik, Freie Universitat Berlin, West Germany. Prior to joining WMU, he was Associate Professor of Mechanical Engineering at University of South Alabama in Mobile, Ala., and the PI of federal and state grants totaling more than $800,000 on engineering education.