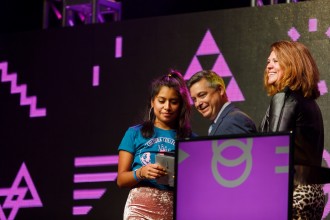 The WMU site was a finalist for the Outstanding Venue Award and featured Pitch Night Bentonville winner Rena Detrixhe’s “Red Dirt Rug Monument.” WMU was also the presenter of the Juried Two-Dimensional Award, and sponsor of the new Youth Collaboration Award for the ninth annual event.

Curated by WMU instructor of art Don Desmett, the renovated five-story, historic building featured the work of 19 artists, including WMU faculty, students and alumni of the Frostic School of Art and the Pitch Night Bentonville winner. Desmett’s curating resulted in a gallery based on sensibilities and energy, featuring artwork of various themes, including identity, environmental issues and racism.

Detrixhe and her “Red Dirt Rug Monument” received the most votes by both the jurors and public, winning her $25,000 as the Time-Based Public Vote and Juried Category Award recipient. The 1,000-square-foot “Red Dirt Rug” was comprised of nearly 200 gallons of sifted dirt from Tulsa, Oklahoma, Detrixhe’s current place of residence. She worked eight hours a day for three weeks to complete the rug, which covered nearly one third of the WMU’s fifth floor. 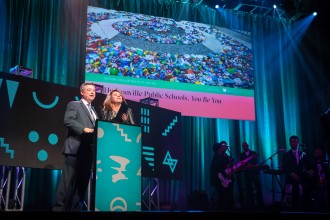 Dr. Dawn Fortin Mattoon and Dan Guyette present the Youth Collaboration Award to “You Be You” by Hudsonville Public Schools.

“We were honored to have Rena’s work featured in our WMU-Grand Rapids downtown location, and thrilled that ‘Red Dirt Rug Monument’ was received so well,” said Fortin Mattoon.

During the Ninth Annual ArtPrize® Awards ceremony, WMU presented the $12,500 Juried Two-Dimensional Award to Sofía Ramírez Hernández for her work, “Sofía Draws Every Day: Years 2, 3, and 4” at Cultura Collective at Rumsey Street.

The University also presented the Youth Collaboration Award to “You Be You” at DeVos Place Convention Center, by Hudsonville Public Schools. The $5,000 cash prize was awarded by public vote to the collaborative ArtPrize® entry.