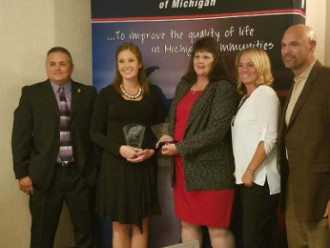 Frederick received the award during the CPAM 2017 Annual Conference, Oct. 17, in Traverse City.

The Crime Prevention Volunteer Award is given annually to those who demonstrate an outstanding contribution to the residents of Michigan in the field of crime prevention.

“I feel very honored and humbled to have been nominated and to receive this award,” said Frederick.

Frederick became interested in social work after she completed her first undergraduate degree in pre-law. She wanted to help people in any way she could, and said the combination of the two degrees are a perfect fit.

Frederick, a current Master of Social Work student at WMU’s Grand Rapids regional location, is completing her course field work with the Grand Rapids Hoarding Task Force. She has been working with the organization for five months helping to ensure safe housing for individuals struggling with hoarding and chronic disorganization disorder.

“We are very excited to know that the Task Force sees Tanja’s contributions as vital to their work,” said Vicki Poleni, coordinator of fieldwork for WMU’s School of Social Work.

WMU’s social work programs prepare students to advocate for social/economic justice and for the personal well-being of all people. The master’s program is offered at WMU’s downtown Grand Rapids location, with weekly face-to-face in-class meetings.