TRAVERSE CITY, Mich.—Freshwater Science and Sustainability students from Western Michigan University-Traverse City assessed the quality of two local streams of interest to the Leelanau Conservancy using procedures employed by the MI-DEQ on Aug. 15. 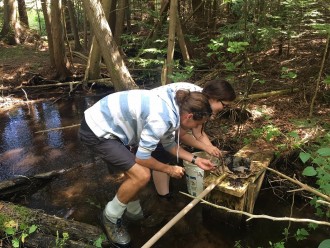 During the research project, students under the leadership of Dr. Steven Kohler installed permanent water temperature loggers in the streams, and measured stream discharge.

WMU launched its Freshwater Science and Sustainability program in 2014 in partnership with Northwestern Michigan College at WMU-Traverse City. The program aims to foster an understanding of the core principles within and the intersections between three pillars of sustainability—environmental, social and economic systems—with a particular emphasis on freshwater sciences.