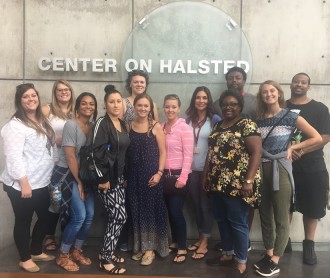 CHICAGO, Ill.—Master of Social Work students participating in an intercultural course at Western Michigan University’s Grand Rapids and Southwest (Benton Harbor) regional locations recently participated in activities within Chicago’s diverse communities. Over the course of four days, students interacted with a variety of cultural Chicago neighborhoods. WMU social work faculty and staff from the Chicago Center for Culture and Urban Life served as guides throughout the experience.

During the trip, faculty and students engaged with several different communities through dialogue and critical reflection upon current social and economic conditions in Chicago. For example, students attended a Friday prayer service at a local Mosque, and conversed with the director of the Muslim Community Center. Students had an opportunity to ask questions about the Muslim faith such as gender roles and violence in communities, that they may have not otherwise had a chance to ask. 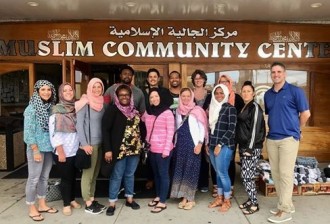 After touring the National Museum of Mexican Art, the group interacted with young muralists in the Pilsen Mexican American community, and learned about the importance of art and culture in the Puerto Rican community. Additionally, the group met with leaders of the African American South Side communities, spoke with LGBT seniors at the LGBT Center on Halstead and engaged with homeless veterans at the Featherfist agency.

While in Chicago, students also had the opportunity to visit the Jane Addams Hull-House, which is known as the original settlement that gave rise to professional social work. 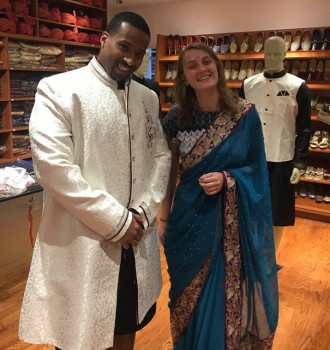 Photo 3: Students in the East Indian community of Devon Street

“The course aims to increase sensitivity to other cultures, increase self-awareness of one’s own cultural backgrounds and explore one’s personal bias, which can impact the therapeutic inventions of future professionals” said Dr. Dee Sherwood, WMU-Grand Rapids Master of Social Work program director. “The Chicago course is an eye-opening experience for many, and we’re grateful to be able to offer opportunities like this for students to experience such a range of diversity without the cost of traveling abroad.” 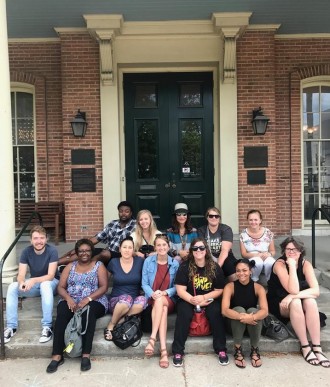 Photo 1: WMU social work students take a guided tour of the LGBT Center on Halsted and its services during an interactive learning experience in the Chicago’s diverse communities as part of an intercultural social work course on Aug. 11. Center on Halsted is the Midwest's most comprehensive community center dedicated to advancing community and securing the health and well-being of the lesbian, gay, bisexual, transgender and queer (LGBTQ) people of Chicago.