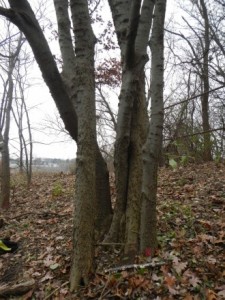 In fall 2010, Dr. Todd Barkman and his botany class discovered an individual of dwarf hackberry (Celtis tenuifolia), the first of its species to be recorded in Kalamazoo county. A plant associated with oak openings, the dwarf hackberry is an uncommon species with only 30 documented occurrences in Michigan. Based on the canopy cover, vegetation and soil composition, this site may be the remnant of an oak opening. The fire-dependent savanna ecosystem typically has a canopy cover between 10 percent and 60 percent, predominantly oak trees. Oak openings are found on dry-mesic loams and serve as the transition from tall-grass prairie to woodland habitats. The construction of roads and towns, expansion of agriculture and subsequent suppression of fire led to the conversion of many oak openings into woodlands or urban landscapes. Only 0.02 percent of these globally rare ecosystems still exist in Michigan, with only two documented occurrences.

About the dwarf hackberry 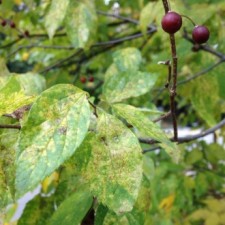