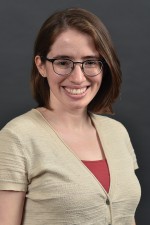 The Office of Faculty Development hired Elise DeCamp in May 2017 as a Part-Time Faculty Fellow to construct and promote professional development opportunities for part-time instructors at Western as well as to act as a liaison to the Part-Time Instructor's Organization (PIO). Elise earned her PhD in Anthropology from Indiana University in December 2013, shortly after completing a one-year appointment as a Future Faculty Teaching Fellow at Indiana University South Bend. She began teaching at WMU in the Department of Sociology in Fall 2013 and the Department of Anthropology the following year. Through participation in panels on race and pedagogy at academic conferences and OFD-sponsored workshops, symposia, and the Teaching and Learning Commons, she has developed a passion for creating more opportunities for part-time instructors to engage in a broader, professional community. Elise's work since Fall 2015 as a member organizer for the PIO has increased her commitment to building a professional support network for the part-time instructors she has met at Western, who wish to feel more connected and involved in the life of the university.