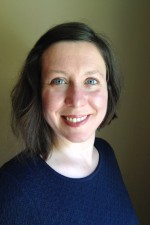 Trained as an art historian and curator, Indra Lācis is deeply interested in the art world that lives somewhere between academia and the mainstream museum.  In her current role as Director of Exhibitions at Western Michigan University’s Richmond Center for Visual Arts, Indra has curated a dozen solo, group, and collection-based exhibitions, including most recently the Midwest premiere of Los Angeles-based painter Christina Quarles (2019); an historical exhibition about Spiral (2019), the African-American activist group based in New York City in the 1960s; and a major group show featuring artists who confront issues of mass incarceration (2018). Prior to her work at the Richmond Center, Indra held curatorial research and project management positions at the Cleveland Museum of Art (2014 – 16) and SPACES (2013), respectively; and as Emily Hall Tremaine Curatorial Fellow at the Museum of Contemporary Art Cleveland (2007 – 2010). Indra earned her MA (2007) and PhD (2014) in modern and contemporary art from Case Western Reserve University in Cleveland, OH.  Published through OhioLink as part of her graduation requirements, Indra’s dissertation analyzed the sociological and performative nature of fame and celebrity in the art world; it has been downloaded more than 9,500 times since its online appearance in 2015.

Indra’s curatorial work is marked by a wide breadth of projects. She has overseen the recreation of early wall drawings by Sol LeWitt (2017) and Pope.L’s PULL!, an ambitious participatory performance staged in Cleveland (2013).  She has organized solo and group exhibitions featuring such varied figures as Emma Amos, Robyn O’Neil, Maria Gaspar, Laurie Fendrich, Peter Plagens, Julian Staczak, Sherrill Roland, Deborah Kass, Lina Puerta, Patrick Van Caeckenbergh, and the collaborative group Photo Requests from Solitary.  Indra has also worked to bring institutional attention to a number of regional artists; recent examples of such shows include Dwayne Lowder, I Bet You Wouldn’t Give It to me Even if I Asked (2020) and Sniedze Janson-Runge: Altars and Myths (2018), both presented at WMU’s Richmond Center for Visual Arts.

Indra’s writing appears in the pages of catalogs published by the Cleveland Museum of Art, the Museum of Contemporary Art Cleveland, and Western Michigan University.  From 2014 through 2016, sheserved as editor of ArtHopper.org, an online platform for art criticism in the Great Lakes megalopolis. Indra has presented her research at a range of conferences, including the College Art Association(2015); Southeastern College Art Conference (2009, 2011, 2015); Midwest Art History Society (2013, 2019); International Journal of Celebrity Studies Conference at the University of Amsterdam (2016); and the First Annual Feminist Art History Conference at AmericanUniversity in Washington DC (2010).

With equal commitment to activism and aesthetics, Indra believes that contemporary art helps us understand the nature of human relationships and the passage of knowledge, as well as sharpening our critical awareness of the present moment.  Establishing lasting relationships between artists, audiences, and institutions continues to make her work deeply rewarding.