The College of Fine Arts celebrates its faculty, staff, and recent guest artists whose work exemplifies the values of the CFA and Western Michigan University.

Special Assistant to the Dean for Diversity and Inclusion

Dr. Kenlana Ferguson is a licensed psychologist and Director of Kalamazoo College Counseling Center. She holds a Ph.D. in counseling psychology from Western Michigan University and has expertise in working with populations of color. In her role at Kalamazoo College, Dr. Ferguson provides emotional and mental health support for students and she has been instrumental in helping students of color navigate institutional barriers. Additionally, she provides workshops on working with students of color, racial identity development, microaggressions, and resilience for the college community. She frequently consults with faculty, staff, and students interested in creating inclusivity in their classrooms, departments, student organizations, and sports teams. Outside of Kalamazoo College, Dr. Ferguson facilitates microaggressions workshops and training for organizations in the Kalamazoo area.

Playwright Reginald Edmund is currently the Founder and Managing Curating Producer for Black Lives Black Words International Project. Inspired by #blacklivesmatter, this project gives voice to some of the most contemporary political black writers from both the US, Canada, and the UK, asking them to explore the question 'Do black lives matter today? In addition, he is a Resident Playwright at Tamasha Theatre in London, England and at Chicago Dramatists Theatre, an Artistic Associate at Pegasus Theatre-Chicago, and an Artistic Patriot at Merrimack Repertory Theatre, he was also a ‘10-‘11 Many Voice Fellow with the Playwrights’ Center. His play Southbridge was runner-up for the Kennedy Center’s Lorraine Hansberry and Rosa Parks National Playwriting Awards, and most recently named winner of the Southern Playwrights’ Competition, the Black Theatre Alliance Award for Best New Play, and the Edgerton Foundation New American Play Award. His nine-play series titled ‘The City of the Bayou Collection’, include Southbridge, Juneteenth Street, The Last Cadillac, and All the Dying Voices were developed at esteemed theaters including Pegasus Theatre-Chicago, Boston Court @ Theatre, the Landing Theatre, the Playwrights’ Center, and more. Reginald received his BFA in Theatre-Performance from Texas Southern University and his MFA in Playwriting from Ohio University. 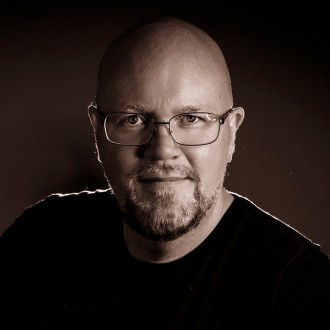 Paul Sizer has lived in Kalamazoo all of his life and loves where he lives. Trained as both a graphic designer and graphic novelist, Paul saw both as vehicles to tell stories and enhance communication to ever-wider audiences.

After getting his Bachelor of Fine Arts in Graphic Design from Western Michigan University, he worked in the private sector for a few years before deciding to start his own freelance design practice, Sizer Design + Illustration, which he still runs today. He also had the opportunity to work part-time back in the Graphic Design program he graduated from, working with Tricia Hennessy in the School of Art, as the production manager and assistant director of the Design Center, where he still works today.

Paul’s graphic design practice brought him into contact with a wider and wider international audience, and he worked with clients all over the world who saw his socially responsible storytelling and designs as a conduit towards talking about important issues of race, gender, equality and equity, and sexual orientation.  His self-published graphic novels were all female-led stories that gained national attention and were nominated for awards through the American Library Association. He produced a series of posters called “Science Builds The Future” which caught the attention of the national March For Science organization in 2016, and was hired to build promotional pieces for the March, as well as designing the identity for the sister “Vote For Science” national organization. The “Science Builds The Future” poster series promoted women and women of color pursuing study in the STEM fields, and hang in labs and classrooms around the world.

In addition to art, Paul has a great love of music and has worked to integrate that into the design work he does, working with noted musicians including Thomas Dolby (“She Blinded Me With Science”) and Bruce Woolley (“Video Killed The Radio Star”), producing art for albums, tours and projects they are involved with. In addition, Paul is also a DJ, and regularly spins dance music at local Kalamazoo LGBTQ clubs and has been the house DJ for Kalamazoo Pride for the last 3 years running.

With all of the interests that Paul has, the common factor in his work is paying forward the platforms he has to give voice and spotlight to voices and causes that need amplification. He works to make his output always serve greater needs and to be a conversation starter for important issues.

You can see more of Paul’s design and illustration work at www.paulsizer.com.