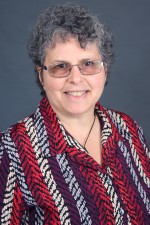 Dr. Michelle Kominz is professor of geophysics and basin dynamics in the Department of Geological and Environmental Sciences at Western Michigan University. Kominz won a 2018 College of Arts and Sciences Undergraduate Advising Excellence Award.

Kominz’ research is in the field of geodynamics; her current research activities center around two main issues: global sea-level change (eustasy) and tectonics. She is actively engaged in geodynamic modeling to determine Cretaceous to recent sea-level change in the coastal plain and shelf of New Jersey and in the Wanganui basin in the North Island of New Zealand. A research project addressing the same issue has evolved into a tectonic project in the Canterbury basin off the coast of the South Island of New Zealand; PhD candidate Katie Dvorak is working on this project. An additional project focused on Miocene to recent tectonics of the Northwest Shelf of Australia is also underway. Much of this work is associated with IODP (International Ocean Discovery Program) and she has served as a physical properties specialist on two expeditions. Michelle has also done considerable research on Milankovitch-scale climate variations in cyclic sediments from the Pleistocene through Cambrian in age.