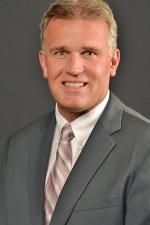 Thomas Wolf Jr. is currently the Chief Information Officer for Western Michigan University in Kalamazoo, MI. After obtaining a Bachelor of Business Administration with a focus on Computer Information Systems from WMU in 1984, he spent the next four years as a Programmer/Analyst in the insurance and banking industries.

In 1988 Mr. Wolf returned to his alma mater, WMU, accepting an entry level Programmer position in what was at the time called Administrative Data Processing. He advanced through a variety of IT positions continually growing his responsibilities to include 19 years of project management and 15 years of staff supervision, eventually being named Western Michigan University’s first CTO on July 1, 2011. In 2017 Mr. Wolf was named Chief Information Officer for the Office of Information Technology.

Mr. Wolf’s strong commitment and passion for WMU has been passed down for generations. Beginning with a grandfather's sister who graduated from WMU in 1951, through his father who was both a 1959 WMU graduate and commanding officer of WMU’s ROTC program, as well as his sister a 1985 WMU graduate,  his wife who received her Masters degree from WMU in 2000 and culminating with the 2011 WMU graduation of his son, a 2010 recipient of the Robert Boughner Outstanding Engineering Student Athlete award.