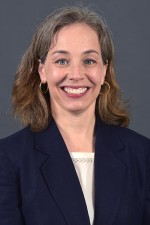 Jessica went to Michigan State University, James Madison College.  She graduated with a Bachelor of Arts, with honors, in 1999.  At MSU, she was a member of the women's rowing team.  Swartz graduated from American University Washington College of Law in 2003, and worked as a health law associate for two law firms in Washington, D.C. In late 2007, she joined the federal workforce as an appellate attorney for the Department of Veterans Affairs.  In that capacity, she represented the Secretary of Veterans Affairs before the Court of Appeals for Veterans Claims.  She also served as a government ethics attorney, advising VA employees on the rules of government ethics.  Swartz also served on various OGC-wide committees and participated in several leadership training programs at VA.  Swartz returned to Michigan in 2016 and lives in Kalamazoo with her husband and daughter.

Swartz is the University’s Freedom of Information Act (FOIA) Coordinator, HIPAA Compliance Officer; and Chair of the University Policy Committee.