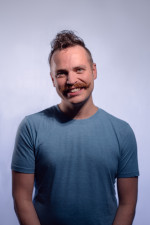 Spencer Arias is a composer, improviser, and educator based in Michigan who creates people-centered music based off shared and contrary experiences focusing on themes of social, political, and environmental changes. They believe that community should be put at the center of music and art and that it should not live within a hierarchy, and that Composers, performers, conductors, and audiences do not have any more or less to offer, and all these spheres are essential to creating new and old music. At the center of this are questions of identity, with a particular interest in Queerness, Gender, and Inclusivity.

While a large amount of Spencer's music is for smaller forces, they have enjoyed writing for bands and orchestras. The collaborative and communal work Concerto for Audience, commissioned by James Brinkmann for the Michigan State University Concert Orchestra alongside composers Elena Specht and Evan Snyder, had the strict goal of showing audience members that they are creative and are essential to the artistic process. This thinking was also crucial to their work Colorful Clouds, which asks the performer to view themselves as creative and vibrant. For Open Instrumentation and Electronics, it has been performed by small to medium chamber ensembles, including the Oklahoma State University Frontiers New Music Ensemble and wind ensembles such as the Seattle Pacific University Wind Ensemble.

They have had performances throughout the US and Europe, having been performed by musicians such as the JACK Quartet, The Columbus Symphony Woodwind Quintet, Quartetto Indaco, the Rogue Trio, The Lotus Trio, The New Thread Quartet, PRISM Saxophone, Quarte, and Nick Photinos. They have won numerous awards, including the Music Now Competition, The Jere Hutcherson Large Ensemble Competition, and the Most Inspirational Performance Art Award at the 2020 Michigan State University Social Justice Art Festival.

As a performer, they work primarily as an improviser using piano, voice, and electronics. They won an East Lansing Cultural Arts Grant to collaborate with fellow composers Lyn Goeringer and Kakia Gkudina on a project called Queerbending, whose goal was to create inclusive queer spaces for the queer residents of East Lansing. As a soloist, they are interested in creating primarily long-form ambient, textural music that does not take itself too seriously.

Spencer believes in multidisciplinary work, which is why much of their work collaborates with non-musical components. Currently, they are working with Plant Biologist Berkley Walker on a project called the Falling Tree Collective which is part of a large National Science Foundation grant which includes a Ted Talk style lecture concert on Plant Biology topics and new music written inspired by these topics, which will appear on PBS in 2023.