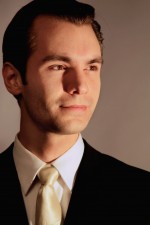 Andrew Koehler is currently the music director of the Kalamazoo Philharmonia, which he leads as part of his position as an associate professor of music at Kalamazoo College. His innovative and thoughtful programming there was recently honored with the American Prize Vytautas Marijosius Memorial Award in Orchestral Programming. He holds concurrent posts as music director of the Kalamazoo Junior Symphony Orchestra, and as the cover conductor and frequent guest conductor of the West Michigan Symphony Orchestra. He also organizes and conducts concerts with the Arcato Chamber Ensemble, which he founded and which is made up of greater Kalamazoo’s finest professional musicians. The group’s premiere performance was hailed as “…exceptional under his baton” by the Kalamazoo Gazette. Through these ensembles, he has collaborated with leading artists such as Danielle Belen, Aaron Dworkin, Alon Goldstein, Rachel Barton Pine, Amit Peled, and Midori.

He is active as a guest conductor close to home and throughout the world. In past seasons, he has appeared with the Grand Rapids Symphony Orchestra musicians; the Lyatoshynsky Chamber Orchestra in Kyiv, Ukraine; the Ruse Philharmonic in Bulgaria; the St. Cloud Symphony in Minnesota; the Festival South Chamber Orchestra in Mississippi; and the Moldovan National Youth Orchestra, a professional group of recent conservatory graduates. He has additionally led ensembles under the auspices of the Aspen Music Festival, the Oregon Bach Festival, the Cabrillo Festival for Contemporary Music, the 2006 Vakhtang Jordania International Conducting Competition (where he advanced to the final round and won the audience favorite prize), and the 9th Grzegorz Fitelberg International Conductor’s Competition in Katowice, Poland (where he won First Distinction and the Youth Jury Prize). Previous music directorships included the Chamber Orchestra of the University of Chicago as well as the Akademisches Sinfonie-Orchester of Vienna, Austria.

Born in Philadelphia to Ukrainian parents, Andrew began his musical studies on the violin at the age of five. He is a graduate of Yale College, where he completed a B.A. in Music and German Studies (graduating with honors and distinction in both majors). During his time there, he served as assistant conductor of the Yale Symphony Orchestra and won the Seldin Memorial Prize in Music. He holds a certificate in conducting from the Universität für Musik und Darstellende Kunst in Vienna, where he studied for two years as a Fulbright scholar, as well as a Master's degree from Northwestern University. His principal teachers have been Victor Yampolsky and Leopold Hager; he has additionally worked with David Zinman, Jorma Panula, Neeme Järvi, and Marin Alsop, among others.