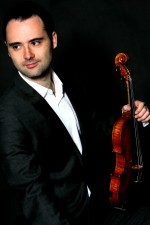 Violinist David Lisker is a member of the WMU School of Music faculty as Assistant Professor of Violin. Described as an “exquisite virtuoso violinist” (Chicago Sun-Times) whose “playing possesses a deeply profound musical instinct” (The Classical Network) and a “cultivated artistic taste” (Kulturas Diena, Latvia), David Lisker has appeared in many of today’s most prestigious concert halls including New York’s Carnegie Hall, Avery Fisher Hall, Alice Tully Hall, and Merkin Hall, The Mann Auditorium in Israel, The Orange County Performing Arts Center in California, The National Arts Centre in Ottawa, and The Shanghai Theatre in China. Mr. Lisker has performed on the PBS television broadcast of “Live from Lincoln Center”, was featured on Bob Sherman’s “Young Artist Showcase” on WQXR in New York, performed in Chicago’s Dame Myra Hess Recital Series live on WFMT and was the only violinist ever to appear on David Dubal’s “Piano Matters” on WWFM Radio. He has been presented in concert at the Casa De La Musica in Ecuador, the Singer Festival in Warsaw, Poland, the St. Andrew Festival in Hungary, the Manchester Music Festival in Vermont, the JAAMM Festival in Denver, the Chicago Beethoven Festival, in the Detroit Institute of Arts’ Friday Night Live Series, with the Queretaro Philharmonic Orchestra in Mexico, and in Lima Philharmonic Society’s Concert Season in Peru.

In addition to his performing career, Mr. Lisker is also Artistic Director of his non-profit organization, the Lisker Music Foundation, which presents brilliantly gifted musicians from around the world in concert halls throughout the Chicago-land. Born in Novosibirsk, Russia, Mr. Lisker immigrated to America with his parents when he was 4 years old and began studying violin at the age of 5 with his father. He continued his studies with Terrine Gomez in Champagne, Illinois, Linda Rose in Los Angeles, and Mark Zinger in Chicago. He went on to earn his Bachelor of Music degree from the Manhattan School of Music in New York where he studied with Pinchas Zukerman and Patinka Kopec, and his Master of Music degree from the Juilliard School where he studied with Itzhak Perlman.