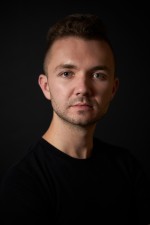 Austin McWilliams
Instructor, Choral Activities
Office:
(573) 712-6316
Send an email
Location:
2308 Dalton, Mail Stop 5434
Mailing address:
School of Music
Western Michigan University
1903 W Michigan Ave
Kalamazoo MI 49008-5434 USA
Education:
Bio:
Austin McWilliams, conductor and countertenor, is a part-time instructor at Western Michigan University, where he conducts the university operas and choral ensembles and teaches several courses.  He strives to present compelling, intriguing music that is directly relevant to the communities in which it is performed. He is the Associate Conductor and Director of Music Education at Opera Grand Rapids, where he acts as both chorus master and head of the contemporary opera series dedicated to marginalized communities. In 2022 he will conduct the world premiere of Frances Pollock’s opera Stinney about George Stinney, a 14-year-old black boy who was wrongfully convicted and executed in 1944.
Austin is the choir director at Fountain Street Church, a non-denominational, non-creedal institution that serves as a venue for radical speakers and ideologies, and is Co-Artistic Director of the Ad Astra Music Festival, a classical music festival in Russell, Kansas, known for its innovative and unique programming. In 2021 at Ad Astra he conducted the world premiere of Anna Pidgorna’s new opera Our Trudy about the life of a local art teacher. He is a course developer at Mizzou Academy and a faculty member at Missouri Scholars Academy, an annual, month-long governor’s school for gifted high school juniors in his native state
In 2019, Austin earned a Master of Music degree in choral conducting at WMU under Kimberly Dunn Adams. There he designed a recital on HIV/AIDS awareness in collaboration with several community organizations, and he earned the School of Music Graduate Award for Excellence in Teaching. Austin graduated in 2017 from the University of Illinois at Urbana-Champaign with a Bachelor of Science in computer engineering.
Facebook Twitter YouTube Instagram
School of Music
Western Michigan University
Kalamazoo MI 49008-5434 USA
(269) 387-4667