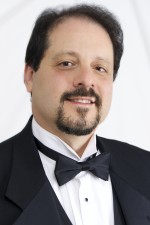 Carl Ratner currently serves as Professor of Voice and Director of Opera for the School of Music at Western Michigan University. He teaches applied voice, French and German Diction, Phonetics for Singers, Vocal Literature, and Opera Workshop, as well as directing the annual opera production. He is internationally known as a baritone soloist, stage director, and opera consultant.

In the Spring of 2018, Ratner participated in the world premiere of Shostakovich’s own arrangement of his Symphony #13 for two pianos, bass soloist, and male chorus. In 2017 he traveled to Bulgaria to perform a concert of Verdi and Wagner arias with the Ruse Philharmonic Orchestra. He was awarded a 2010–11 Fulbright grant to perform in recital, give lectures and master classes, direct an American chamber opera and research Russian art song at the St. Petersburg Conservatory in the Russian Federation. In 2011 he toured the eastern United States with a recital of songs by Russian and Russian-American composers, beginning with a performance at the Russian Cultural Center in Washington, D.C. He also collaborated with the Bach Ensemble of Naples Florida for performances of Messiah as well as a mixed program of sacred music that was toured to Germany and the Czech Republic.

His operatic engagements have included the leading baritone roles of Mozart′s The Magic Flute, Verdi′s Falstaff, Puccini′s Gianni Schicchi, Madama Butterfly, and Turandot, as well as Robert Ward′s Pulitzer Prize-winning operatic version of The Crucible. He has performed in concert and recital in ten states and six European countries and has sung in 14 languages. He gave the world premiere of Robert Patterson’s song cycle American Pierrot: A Langston Hughes Songbook, and is currently preparing for the world premiere of Bruce Trinkley’s cycle Tennessee Williams Songs.

Ratner′s career also includes more than two decades of experience as an opera director. He learned his craft assisting directors at major opera houses including Covent Garden (London), the Metropolitan Opera, Munich Opera, San Francisco Opera, Lyric Opera of Chicago, Santa Fe Opera and the Spoleto Festival in Italy, where he worked with eminent composer Gian Carlo Menotti. From 1994 to 1999 served as artistic director of Chicago Opera Theater, Chicago′s second largest opera company, and previously held the same position with Chamber Opera Chicago from 1984 to 1993. He has staged professional productions throughout the United States.

He received his Bachelor of Music degree in music history from the Oberlin Conservatory in Ohio and also participated in an internship in opera, dance and drama production at The Juilliard School in New York City. He earned a Master of Arts in vocal pedagogy at Northeastern Illinois University in Chicago and his Doctor of Music degree in vocal performance from the School of Music at Northwestern University.