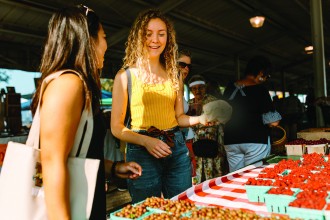 KALAMAZOO, Mich.—A new study from Southwest Michigan First and Western Michigan University has found that the University annually has a $1.6 billion economic impact on the local region.

"WMU's local economic impact is an excellent return on investment for Michiganders," says WMU President Edward Montgomery. "The University's return of $1.6 billion to its local community is 15 times greater than the state's investment in WMU. In fact, our total impact is greater than Michigan's entire budget line for all state universities."

In fiscal year 2016-17, the year of the study, the state invested $1.4 billion in all state universities, including $104 million for WMU. For every dollar the state invests in WMU, it returns $15.40 in economic vitality for the local region.

The study also determined that WMU supports 16,690 direct, indirect and induced jobs in the local area.

"Imagine the home side of Waldo Stadium with every single seat filled. That's how many jobs we're talking about," says Ron Kitchens, chief executive officer of Southwest Michigan First and a member of the WMU Board of Trustees.

"I believe that if our region is to thrive in the future, we must grow the portion of our workforce that has earned a bachelor's degree. We are currently 20 percent below the national average. WMU is an enormous help. It can enable us to attract young professionals here, and we can entice them to stay."

Students have an impact during their time in Kalamazoo. Each WMU student adds $11,500 to the local economy.

"It's wonderful to see students in local businesses," Kitchens says. "They bring vitality to our community. But they also bring resources. When you see four students having brunch, that's not just a $46 tab, it's $46,000 each year in rent, groceries, checking accounts and entertainment. They contribute handsomely to our community as individuals and as citizens."

The study covered Calhoun, Kalamazoo and Van Buren counties, and it was conducted by Impact DataSource LLC, located in Austin, Texas.

•    WMU has a local economic impact of $1.6 billion.
o    This is a sum greater than Michigan's entire budget line for all state universities—$1.4 billion during the year of the study.
o    For every dollar the state invests in WMU, the University returns $15.40 in economic vitality to the local region. In fiscal year 2016-17, the year of the study, the state invested $104 million in WMU.

•    WMU supports 16,690 jobs in the local area, enough to fill every single seat on the home side of Waldo stadium.

•    WMU students have a tremendous impact during their time in Kalamazoo, with each contributing $11,500 to the local economy
o    Also, though not from the study, WMU students contribute 235,000 hours engaged in the community each year.