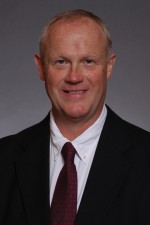 Dr. John Tanis is a professor of atomic and molecular optics physics in the Department of Physics at Western Michigan University. He received his Ph.D. in 1976 from New York University in experimental atomic collision physics, investigating fundamental interactions between ions and atoms. He came to WMU in 1980 following postdoctoral appointments at the University of North Carolina, Chapel Hill and at Lawrence Berkeley Lab.

Tanis has been involved in a broad range of collision research, conducting studies at WMU using the tandem Van de Graaff accelerator as well as accelerators at several other laboratories in the U.S. and in Europe. He has spent three sabbatical leaves at the Hahn-Meitner-Institute (now the Helmholtz-Zentrum) in Berlin, Germany, and a more recent sabbatical at the Grand Accélérateur National d'Ions Lourds in Caen, France.

During his career, Tanis has published more than 185 articles in peer-reviewed journals and presented more than 400 talks or posters at national and international conferences. He has received funding supporting his research from the National Science Foundation, the U.S. Department of Energy, the Research Corporation and North Atlantic Treaty Organization.

In 1990 Tanis was elected to Fellowship in the American Physical Society, and in 1993 he received the University Distinguished Faculty Scholar Award, the highest professional recognition for a faculty member at WMU. He has served as department chairperson twice, from 1989-93 and from 1999-2002. In 2001 he developed a course, PHYS 1000: How Things Work: The Physics of Everyday Life. This non-mathematical course is designed specifically for non-science liberal arts majors seeking a course to fulfill their general education science requirement.

2009 International Conference on Photonic, Electronic and Atomic Collision at WMU