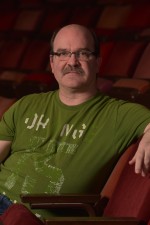 Brian Boyer, master electrician for Western Michigan University's Department of Theatre, started his career at Albion College in Albion, Michigan, earning his B.A. in speech, communication and theatre and performing in more than half the student productions. Following professional lighting work, he joined Wayne State University’s M.F.A. lighting design program, where his lighting designs for Of Mice and Men and Pericles received nominations for show of the year by the Detroit Free Press. He accepted a post-graduate position with the School for Creative and Performing Arts in Cincinnati as the lighting instructor. At SCPA, Brian implemented the lighting designs for fireworks at Cincinnati’s premier regional theatre, the Aronoff Center, and received is M.Ed. from Wright State University. Next, his career took him to Cincinnati’s Xavier University as the technical director/lighting designer. Prior to joining WMU, Boyer held the position of visiting professor of lighting design at Purdue University where he received acclaim by designing Jacquelyn Reingold’s new play and first performance of A Story About a Girl.