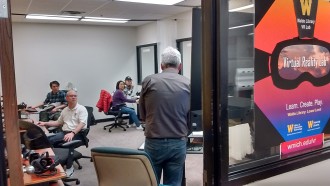 Western Michigan University offers workshops and online tutorials to help you to discover the power of virtual reality and even start making your own VR content. There are no prerequisites for any workshop, although it is suggested that you start with the Unity tutorials available below. All workshops are held in the Virtual Reality Lab located on the lower level of Waldo Library. Registration is required for most workshops.

Check back for dates for the following workshops:

Get your first look at Virtual Reality and learn about the different types of VR content that are available. We will explore panoramic photographs, VR Video, non-interactive VR content, and fully interactive VR titles.

Learn how to start making your own virtual reality content using the Unity Game Engine. Attendees will learn how to navigate Unity's interface, create basic objects, enable Unity's VR capabilities, and add VR interactions with the Oculus Touch controllers. See the Unity links below for downloads and intro tutorials.

Creating art is an amazing experience in Virtual Reality thanks to the many creative applications available. Get an introduction to sculpting in Oculus Medium and 3D painting in Oculus Quill.

Virtual Reality isn’t very engaging without objects to interact with. Learn the basics of creating 3D models for use in Virtual Reality (and many other) applications.

Learn more about the Nursing Simulation by Kevin Abbott and the students in his VR Studio.