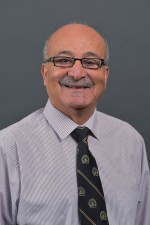 In 1982 Dr. AbuBakr received his doctorate in chemical engineering from Michigan State University. From 1982-1985, Dr. AbuBakr was an assistant professor at Yarmouk University—Jordan, where he developed a new chemical engineering department. From 1985-1993, he moved to Stevens Point, WI, where he accepted a position as an assistant professor. He was promoted to associate professor and then full professor and received the 1987 University Wide Teaching Excellence Award. In 1993 he joined the USDA Forest Service, Forest Products Laboratory as The Research Project Leader and Supervisory Chemical Engineer for the Fiber Processing Group until accepting a position to Chair the Department of Chemical and Paper Engineering in 2001. In 2015, Dr. AbuBakr returned to faculty to do what he has the greatest passion for.

Dr. AbuBakr is the author of over 140 papers, edited a book and wrote chapters in five other books. Major research accomplishment includes leading an interdisciplinary team from government, academia, and the private sector to solve problems associated with recycling paper containing Pressure Sensitive Adhesives that lead to the development of the environmentally benign USPS self-sticking stamps, removing contaminants during paper recycling by mechanical, chemical and biological means. In addition, he is actively participating in international collaborative research.

Dr. Abubakr has received several meritorious recognitions from all his professional and academic peers. He was the winner of the USDA Secretary’s Group Honor Award, which was won four consecutive years. Other honors include the Forest Service Chief’s Technology Transfer Award, the University of Wisconsin Teaching Excellence Award, the 2013 Educator of the Year and inclusion in Who’s Who in America, Who’s Who in Science and Engineering, and Who’s Who in the World. He also served as a panel member for TAPPI’s Forest For Our Future display at Disney’s Epcot Center in Orlando, FL.