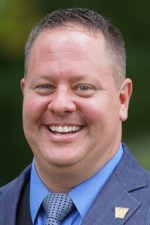 Dr. Kahler B. Schuemann joined the Office of the President staff in 2006. Prior to serving as chief of staff and secretary to the Board of Trustees, he was assistant to the president at WMU from 2006 to 2017. Previously, he led Student Services at the University of Alaska, Prince William Sound Campus, and earlier served as director of Housing, Student, and Residential Life at Lake Superior State University.

Schuemann was awarded the 2017 WMU Staff of the Year presented by the WMU Graduate Student Association in addition to a 2017 Outstanding Service Award from the Association of Public and Land Grant Universities.

Schuemann serves as an adjunct faculty member in the WMU Department of Educational Leadership, Research and Technology. When not focused on inspiring the next generation of leaders and motivating organizational achievement at WMU, he enjoys outdoor adventures in the woods and on the water.