From Preservation and Progress: Historic Homes of Western Michigan University 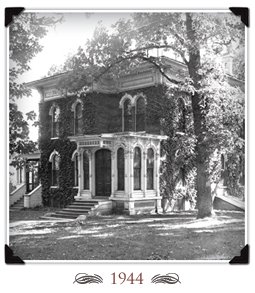 Mark Twain liked to call the booming end of the 19th century “The Gilded Age.” Financial success brought dreams of elegance to business people across the country. Leading Kalamazoo families built luxurious villas on the hills around the edge of town. Most are gone; but one, known from the beginning as The Oaklands, still stands in its stately grove.

Builder Robert Babcock would be as surprised as today’s students to learn that his homestead would become a “mecca for the nation’s horse fraternity.” A bronze plaque pinned to a nearby boulder commemorates the birthplace of Peter the Great, winner of the Kentucky Futurity in 1898 and sire of nearly 600 standard record harness racers.

Babcock came to Kalamazoo in 1850. He left a prosperous dry goods business in 1869 to head the new First National Bank. That year, he bought 16 acres on the old Territorial Road and soon moved into the 23-room Italianate Villa named for the oaks in his front yard.

America’s most famous architectural critic, Andrew Jackson Downing, once called a villa “the most refined home of America — the home of its most leisurely and educated class of citizens.” Downing also assumed a “person of competence or wealth sufficient to build and maintain it with some test and elegance.” New York architect Samuel Sloan, who designed the first “asylum” building across Arcadia Creek and the Red Cross building at 530 West South, said the style was “intended for the countryseat of a man of ample fortune, and to occupy a site in the midst of highly cultivated and beautiful scenery.”

Following the financial panic of 1873, only the scenery remained untouched. The Oaklands stood vacant, owned by E.R. Gard of Chicago. In June 1876, it should have been auctioned to satisfy a $12,000 note held by local wagonmaker Benjamin Austin. Hours before the sale, it caught fire; only its brick walls remained. Austin and his family occupied the rebuilt home through the 1880s. In 1893, he turned it over to his daughter, Amelia, and her husband. 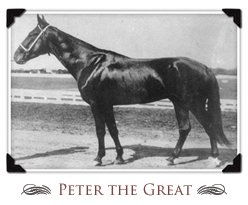 1865, young Daniel Streeter married Amelia and went to work for her father. In 1876, he joined the Black Hills gold rush, wintering in Deadwood and taking up a freighting contract in the spring. The next year, he launched himself as a railroad builder in Wyoming and Colorado. Later, he pushed Chicago, Burlington & Quincy beyond the Missouri River, extended the Denver & Rio Grande west of Leadville, Colorado, and worked on the Atchison, Topeka & Santa Fe, the Rock Island system, and the Chicago & Northwestern line. He also built western tunnels for the Northern Pacific and did work for the New York Central and the Chicago, Milwaukee & St. Paul. No wonder trains stopped for his convenience on the tracks below the house. But Streeter brought excitement to the Oaklands for another reason.

“Made Famous by Horse,” the headline read when Western acquired the Oaklands in 1944. Daniel Streeter turned his pastures into a breeding farm for harness racers. Santos, his mare, and Peter the Great spread his reputation on two continents. Born in 1895, Peter the Great would win every heat of the Kentucky Futurity in 1898. Sold that year for $20,000, he would contribute one of harness racing’s important blood lines at stud and see his value raise to $50,000 by 1916.

Streeter died in 1909, and in 1920 the family sold the Oaklands to Dr. Charles Boys. Greens and fairways for two golf courses replaced the Oaklands pastures. After World War II, Western Michigan University made the property a residence for presidents and center for a new campus. In 1982, The Oaklands saw its interior refurbished as a “Designer Showhouse.”

In 1988, the University stripped away layers of white paint and returned the exterior to the quiet colors and rusticated stucco so popular in Robert Babcock’s day. Today, a guest house, the Oaklands stands in its namesake grove, reminding students of earlier elegance and adventure.