Western Michigan University is a learner-centered, research university, building intellectual inquiry and discovery into undergraduate, graduate, and professional programs in a way that fosters knowledge and innovation, and transforms wisdom into action. As a public university, WMU provides leadership in teaching, research, learning, and service, and is committed to enhancing the future of our global citizenry.

Nationally and internationally recognized, the University aspires to distinguish itself as learner centered, discovery driven, and globally engaged.

The synergy of these three pillars enables WMU to be a premier and distinctive university of choice. Western Michigan University offers all students a learning community designed for and dedicated to their success. We are committed to access and affordability, and sustaining an environment in which every student can meet the world head-on and triumph. 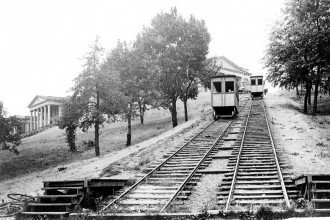 Grateful riders were able to use the "Normal Railroad" year-round for nearly 40 years.

May 27, 1903—WMU is established by an act of the Michigan Legislature as a preparatory school for teachers and named Western State Normal School.

1904—The first classes are offered, with 117 students enrolled.

1905—Two-year teaching certificates are awarded at the first commencement.

1908—Michigan’s shortest standard-gauge rail route opened on the northeast corner of what is now Heritage Hall, with a double-track rail bed running up Prospect Hill from Davis Street. The Normal Railroad, affectionately known as “the trolley,” was powered by a stationary electric motor at the top of the hill and was in operation until 1947.

1920—The first bachelor’s degrees are awarded. 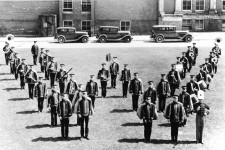 The “W” formation has been a staple of Western bands at least as far back as 1924.

1939—The school nickname is changed from the Hilltoppers to the Broncos.

1953—The first master’s degrees are awarded.

1968—The first doctoral degrees are awarded.

2000—WMU is classified as a research university by the Carnegie Foundation for the Advancement of Teaching. 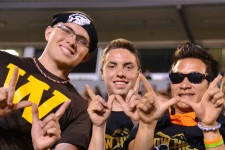 Bronco fans turned out in record numbers for the 2016-17 football season.

2017—WMU’s Cotton Bowl appearance marks only the second time that a Mid-American Conference football team was selected for a New Year’s Six bowl game. Although the undefeated, No. 15-ranked Broncos lost the contest by eight points to No. 8 Wisconsin, the 2016-17 team ended its season with 73 program records broken.