Hawks are one of the many bird species that are part of the Asyulm Lake Preserve ecosystem.

The Kalamazoo Nature Center performed an ecological study on Asylum Lake Preserve in October 2001. The study included historical uses and land cover, a natural features inventory and habitat enhancement recommendations. Field personnel visited the site regularly between September 1, 1999 and November 30, 2000, noting plant and animal species and their associations. Special effort was made to search for areas critical for preservation and for habitat likely to support listed species. Quantitative surveys of birds, mammals and forest plant species were conducted. Soil types and locations were recorded to determine how it can be used best by plants and animals. 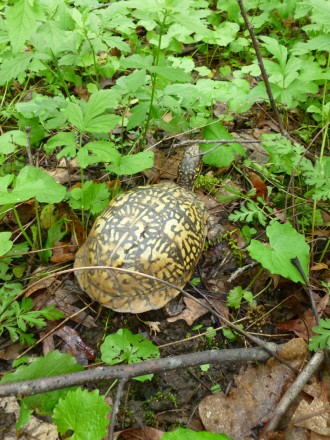 The vegetation on the site was not notably diverse. Specifically, the herbaceous and shrub layers of the flora included extensive populations of invasive species. As a result, the coefficient of conservatism is relatively low. It appears the increase in numbers of glossy buckthorn is causing a decrease in native wildflowers and biodiversity. Numerous white-tailed deer also contribute to habitat degradation. However, the long period of human use is mostly responsible for the low plant diversity and proliferation of non-native species.

Asylum Lake is a critical habitat for a number of species of resident and migrating birds. Current vegetation trends would likely be detrimental to breeding bird species through reduced nesting success because of increased exposure to predators. The plentiful non-native fruiting shrubs, however, provide substantial food for post-breeding and migrant bird populations.

Amphibian populations appeared relatively low, with no unusual species noted. Turtles and snakes in general were plentiful. During the summer of 2000, sixteen species of dragonflies and approximately 30 species of butterflies were identified on the property.

A balance must be found between controlling invasive plant species and maintaining nesting and feeding habitat for breeding and migratory bird populations. Research supports plans for the restoration of the prairie and oak savanna using controlled burning in limited areas, while leaving a wooded buffer along the waterways.

The Kalamazoo Nature Center is a non-profit organization whose mission is to inspire people to care for the environment by providing experiences that lead them to understand their connection to the natural world.