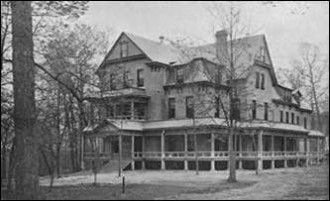 Asylum Lake Preserve includes approximately 217 acres of land, a 47 acre lake and a 10 acre lake. Phineus Hunt first owned the land included in this management area after purchasing it in 1831 from the territory of Michigan’s Kalamazoo District Land Office. Soon after, in 1835, Neil Hindes purchased the land from Phineus Hunt. The 1873 county atlas shows that Neil Hindes owned 240 acres south of the lake. Daniel and Jane McMartin owned 101 acres north of the lake, named the McMartin Lake at that time. During the years Neil Hindes owned the property, land was cleared for orchards and buildings were constructed. However, according to studies, there is no evidence of this farming or construction occurring at the preserve. Neil Hindes died in 1874 and his property was transferred to his descendants.

In summer 1887, the Michigan Asylum for the Insane purchased the Hindes Farm from Neil’s eight surviving children, including most prominently his oldest daughter, Margaret S. Smith, for a total of $18,000. In October of 1887, the Michigan Asylum for the Insane (later named the Kalamazoo State Hospital) purchased portion of the D.D. McMartin Farm bordering the McMartin Lake to the north. Some time later, the lake became known as Asylum Lake. The Trustees Report of the Michigan Asylum for 1887-1888 indicates that the land was acquired as part of a "Colony Farm" and recreation experiment. By 1960, the complex consisted of five cottages to house the patients, a central heating plant, two garages, a pump house, a water tower, water pipes, steam pipes and connecting tunnels. The facility was phased out and finally abandoned in 1969. All buildings and most of the above-ground architecture were demolished in 1971. In 1977, the water tower was demolished and the entrances to tunnels were destroyed. 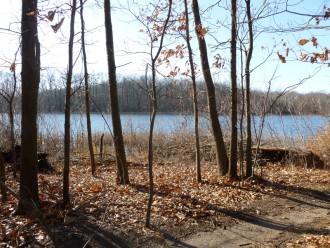 Ownership of the land was transferred from the state of Michigan to Western Michigan University in 1975 through the Public Act No.316 with the restriction that the property be used, “solely for public park, recreation or open space purposes...”(Sec.1.2). This act was amended in 1976 to correct the easement parameters and northern boundary in Public Act 272. During the years 1976 to 1999, WMU leased about 70 acres on the corner of Drake Road and Parkview Avenue to local farmers to be used for farming, mostly corn. In 1998, the city of Kalamazoo and WMU agreed to create an endowment for the preservation and conservation of the Asylum Lake Preserve. The Asylum Lake Preservation Fund was established through the Kalamazoo Community Foundation to be used to develop and maintain the land for public passive recreation.

The city of Kalamazoo, during 2000 and 2001, expanded Drake Road along the west border of the preserve into a boulevard. At the same time, WMU began construction on the Business, Technology and Research Park south of Parkview Avenue. Local opposition to this construction led to a compromise, and the WMU Board of Trustees adopted a Declaration of Conservation Restrictions on April 16, 2004 for the Asylum Lake Preserve property. This document outlines the purpose of the property as promoting ecosystem integrity and natural aesthetics; ensuring passive recreation; and supporting research and education. It also included the Asylum Lake Management Framework developed to outline the implementation of the Declaration of Conservation Restrictions. The framework document develops the structure and duties of the Asylum Lake Policy and Management Council, including the creation of a management plan for the preserve. Since the transfer of land from the state to WMU, this land has been used heavily for recreational, educational and research purposes.