Many of the campus buildings constructed between 1938 and 1942 were ornamented with carved sandstone bas-relief sculptures. These buildings include the Manual Arts Building, Spindler Hall for Women, Vandercook Hall for Men and The Theatre (corner of Oakland Dr. and Oliver St.). Vandercook Hall has the greatest number and variety of sculpted forms. The two entrances each feature bas-reliefs flanking the inscribed building name. It is not known who designed the bas-reliefs.

Through the years many faculty have freely given time and talent in support of the institution—one of them may have designed these sculptures. John Kemper, faculty from 1942 to 1970, is well-known for his graphic designs and murals, but the bas-reliefs pre-date his tenure. Lydia Siedschlag, faculty and, later, head of the Art Department, decorated the interiors of all building built from 1936 through the 1950s, but there is no indication that she dealt with the exterior facades as well. 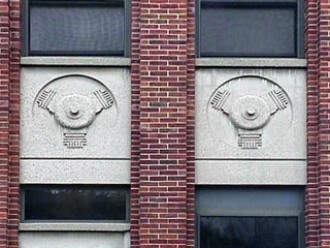 Bas-reliefs from the Brink Building. These are now housed at the College of Engineering and Applied Sciences, on the Parkview campus.

The Mechanical Trades Building was constructed in 1941. By 1959, it had been renamed the Industrial Trades Building. In 1965 it was vacated when the College of Applied Science programs moved into the new Industrial and Engineering Technology facility (Kohrman Hall). The building then became home to the University's Brink Printing Services, named after Lawrence J. Brink, director of the first Printing Management program in Michigan. The program started in 1955.

The turbine bas-reliefs reflect the use of the Mechanical Trades Building for the study of aircraft mechanics and technology. Western has a long history in aviation technology, flight science, pilot training and, most recently, aeronautical and mechanical engineering.

The Brink Building was razed in 2001 during planning for the Indoor Practice Facility. The bas-reliefs were preserved, and are being displayed at the new College of Engineering campus. 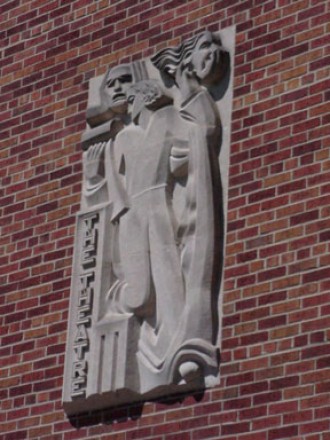 Bas-relief above the front entrance of The Little Theatre.

Also known as The Theatre and the Oakland Recital Hall

The Theatre was in continuous use from 1942 until 1967 when the Shaw Theatre was completed on West Campus. The acoustics in the lecture and recital hall were regarded as ideal for recitals and stage productions. The hall seated about 350 and was regularly scheduled for large lecture classes. The Theatre also has a generous lobby and ticket office, a large backstage, public restrooms and a projection booth. The rehearsal room on the second floor still has the marker boards with fixed staff lines for music education classes.

The public areas of The Theatre were renovated in 1996, with a new seating capacity of 196. The hall was renamed the Campus Cinema, and is the new home for the University Film Society, as well as being used for meetings and a variety of presentations. The design themes for the renovation were taken from the original building features. The remodeled stage and proscenium arch repeat details from the front entrance and the bas-relief. Some of the original etched glass is reused in the interior. New etchings were designed to complement the originals. The new interior doors into the Campus Cinema were designed by the WMU School of Art's Design Center. 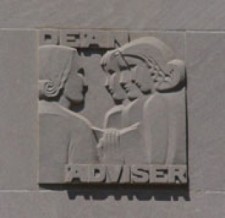 The Spindler Hall reliefs have titles incorporated into the works. They depict female students and a female figure in a mentoring relationship. The titles "Critic," "Director," "Dean" and "Advisor" all reflect positions of mentoring or guidance. While today's common usage lends negative connotations to "critic", a more classical definition of the word is:

"One who expresses reasonable opinions or judgments on truth, righteousness, beauty or value."

The relief titles also refer to Lavina Spindler herself, who served at Western from 1906 to 1939. Her positions included Director of the Campus School, Dean of Women, and Freshman Advisor. 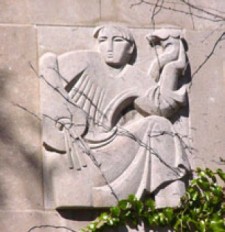 A bas-relief at Vandercook Hall, depicting an artist with brush and a palette.

Henry B. Vandercook is referred to in Dr. Knauss' history ("The First Fifty Years," written for the semi-centennial) as "the Father of Western". In 1903, Henry Vandercook was an elected member of the State House from Grand Rapids. He led the legislative campaign to authorize the creation of a normal school in southwest Michigan, which would become the Western State Normal School and, eventually, Western Michigan University. Vandercook Hall was completed in 1939.

The Vandercook Hall bas-reliefs are not labeled, but the stylized forms and robes relate to classical themes. Looking at the figures as archetypes, a figure with a palette is perhaps "Artist" and a figure with a cello "Musician". There are also football players, obviously "Athletes", but having two figures instead of one may indicate something more, such as "Sportmanship" or even "Mens sana in corpore sano" (a sound mind in a sound body). Seated figures with what appears to be a scrolls or tablets are a little more abstract, but in the classical sense they could represent "Student and Teacher," "Storyteller," "Historian" or even "Philosopher".