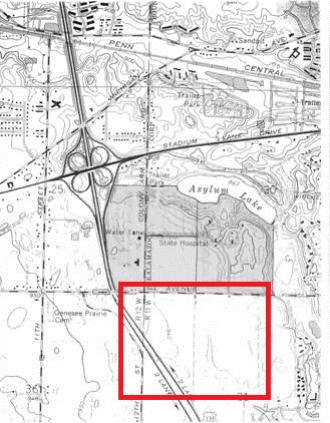 Once known collectively as "The University Farm", the Western Michigan University properties just east of Michigan 131 and south of Stadium Drive include the Colony Farm Orchard, the Asylum Lake property and the Lee Baker Farm. Public Act 269 deeded the property from the state of Michigan to the University in 1959.

The Lee Baker Farm was named by the WMU Board of Trustees in October 1983. Lee Baker was professor and department chair for the Department of Agriculture in the College of Applied Sciences. He and his family lived on the farm for many years, using its resources for research and for enhancing the academic programs.

The development proposal was soon dropped. Local neighborhood associations opposed the change, and so did those wishing to maintain the land for passive recreation. There was also strong support for returning the Asylum Lake property to its pre-farming vegetation, with large stands of oaks and fields of prairie grasses.

In 1998 WMU President Elson S. Floyd made the decision to develop the Lee Baker Farm for a new College of Engineering building and for a business, technology and research park. An agreement with the city of Kalamazoo allowed part of the Lee Baker Farm to be rezoned for business and light industry. The University agreed to set the Asylum Lake property aside for passive recreation and would not develop it for other uses.

In 2000, the year-long construction started on the site, the Lee Baker Farm was renamed the Parkview Campus.