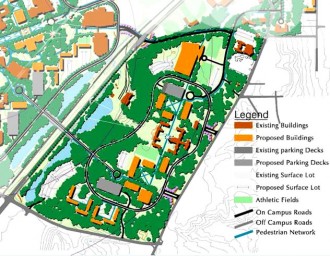 2001 Campus Master Plan and Development of the Oakland Drive Campus.

The Oakland Drive Campus is Western Michigan University's most recent acquisition. Originally state property, the Kalamazoo Regional Psychiatric Hospital was transferred to Western in 1998. It has proved valuable as a location for the permanent home for the College of Health and Human Services and for its potential as a resource that WMU can use for expanded research and health care service programs, contributing to Michigan's "Health Care Corridor".

The new building for the College of Health and Human Services is located on WMU's Oakland Drive Campus. On the building's east side, a curved glass "curtain wall" faces the Oakland Drive streetscape, while the building's west side and main entrance can be seen on West Campus, when looking across Stadium Drive. The architect of record for the project was SmithGroup of Detroit.

The College of Health and Human Services was established in 1976; its twenty-fifth anniversary was celebrated in 2001. However, the various programs and departments of the college remained in disparate and unrelated locations on both the East and West Campuses. Projected future trends in economic growth areas, career fields and funded research all pointed significantly to the health care and life sciences industries. To provide the necessary environment for fulfilling these expectations, the University located the new college building in proximity with other viable health services programs for the University and the community.

The 2000 Campus Master Plan looked at each of WMU's significant geographic areas and developed recommendations for use and development based on anticipated future University needs, with historical context, neighborhood concerns and unique natural features also considered.

On the Oakland Drive Campus the tree-lined open space along Oakland Drive was identified by both the University and the local neighborhoods as a valuable aesthetic resource.  Among the recommendations of the Master Plan report were to maintain a three-hundred foot "no-building-zone" along Oakland Drive to protect this resource. The zone reflected the hospital's historical building patterns; over the years many buildings were built and demolished all the while maintaining a park-like set-back from the road.