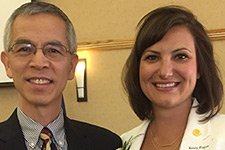 Pagan graduated in 2004 with double majors in school health education and women’s studies, and a minor in political science. As one of the youngest recipient of this prestigious award, she has used her energies to create potential for political change that impacts education and economic development. While at WMU, Pagan was an outreach worker at Prevention Works, a media and publicity intern for a state representative’s election campaign, the Director of “Swords into Plowshares Peace Center”, and a Coordinator for the Sexual Peer Health Education Program. She also was involved in a number of organizations at WMU: Co-Founder of Youth Empowerment Organization, President of Western’s Organization for Women, President of Voices for Planned Parenthood, President of Progressive Student Alliance, Vice President of Eta Sigma Gamma-Gamma Mu, Western Student Association Senator, and Voices Against Violence Co-Chair.

After graduation, Pagan received her Master of Arts in Political Management with a Concentration in Political Leadership from George Washington University in 2007. While in the Capital, she worked as a legislative aid in education policy for Senator Debbie Stabenow, and was elected as Chair of D. C.’s largest networking organization for women, WIN. She also served as a national grassroots organizer for the Center for Science in the Public Interest, a non-profit organization dedicated to improving the lives of children.

Upon returning to Michigan, she served the following organizations: Canton Community Foundation (board of directors), Youth Leadership Canton (advisory team), Young Democrats of Canton (co-founder), MI Progressive Job (business owner), the Science, Technology, Engineering and Math (STEM) Academy (volunteer), and Alternatives for Girls, Detroit (volunteer). Ms. Pagan has recently served as a trustee in Canton and Plymouth, Chair of the Outreach Committee for the 11th Congressional District, and the Vice-Chair of the Michigan Democratic Party Youth Caucus. In 2012, she earned the distinction of serving as a delegate at the Democratic National Convention. Most recently, she was elected to the Michigan House of Representatives for the 21st house district. She has been appointed to the House Appropriations Committee, and also is serving on the Department of Community Health Appropriations Subcommittee, and the ranking Democrat on the Department of Education Appropriations Committee.